McQuillan reflects on losses, focuses on future of program 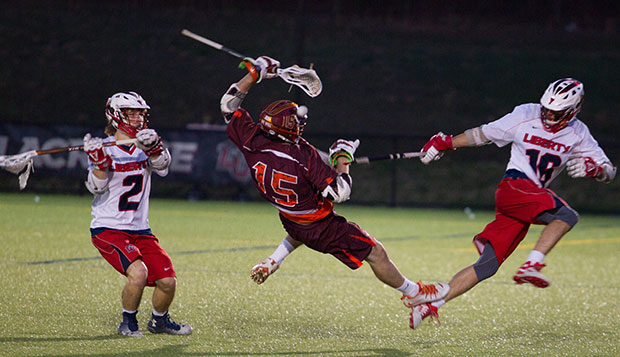 Liberty University men's lacrosse Head Coach Kyle McQuillan reflected on this past season and took a look at the year to come during a recent Coaches Club interview with Club Sports Video Coordinator Gabe Henderson.

The Flames (9-4) played an extremely high level of lacrosse, stretching their home winning streak to 23 games capped by a 15-7 regular-season-ending rout of SELC Northwest Region rival Virginia Tech. They were ranked 15th in the final regular-season MCLA Division I poll, but missed at-large and autobids to the MCLA DI National Championships by losing to eventual champion Georgia Tech in the SELC Tournament semifinals for the second straight year.

"We graduated some phenomenal kids," McQuillan said. "We had nine guys we graduated who are moving on. We had two All-American first-teamers, Ryan Miller and Brett Bernardo, and two honorable mentions, Bryce Mrakovich and Brandt Grauss on the defensive side of the ball. It's definitely going to be tough with some of the key leadership roles we're going to be losing, but we're also really excited about our incoming freshman class and what they're going to be able to bring to the table."

Entering a busy offseason, which includes the Liberty Men's Lacrosse Summer Camp from June 20-24 and recruiting trips, he remained optimistic about the program's future, which appears extremely bright.

"There's a lot to look forward to," McQuillan said. "It feels like it's a long time, but it goes pretty quick and we're back at it here starting in September. We've got a few months to kind of take a breath and maybe relax, reload, refresh and hopefully go out and get on the road and find some more recruits for years to come and continue to move this program in the right direction. It's definitely going to be hard to revamp the program and to bring some of these new guys in and some new blood, but we've got a lot of faith in them."