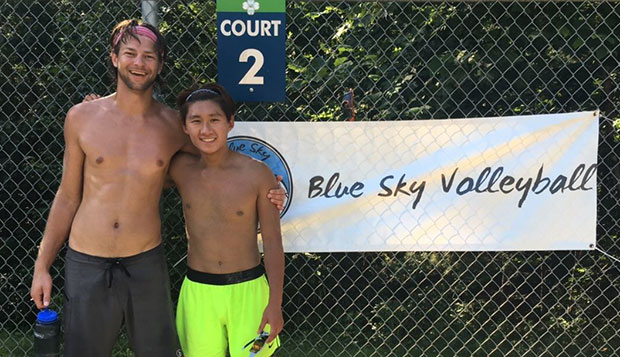 Sam Eisbrenner (left) and David Hong took first in the Men's AA Division at the Blue Sky beach volleyball tournament this past weekend.

Kicking off its summer travel schedule, the Liberty University beach volleyball team served up some championship-contending performances at the Volley America June Blue Sky Tournament in Cary, N.C., as a women's pair was the Open (top-level) Division runner-up and two men's pairs cleaned house to meet in the AA Division final.

The Flames' Sam Eisbrenner and David Hong (a junior and graduate student, respectively) defeated teammates Paul Brueckner and Caleb Pitcher (senior and sophomore) in the all Liberty finals of the Men's AA Division. Both teams went undefeated in pool play and the playoffs to reach the championship.

"Both Caleb and Paul were swinging well and were able to stay in system with controlled passes and setting — which allowed them to swing aggressively the whole day," said Flames assistant coach Kaleb VanDePerre, who took the reins from head coach Rachel Willis as she was unable to make the trip due to a work conflict. "This was Sam's first tournament away from LU and the pair played well together. Defensively, they outplayed the other teams and were able to stay in system throughout the day, resulting in steady offensive production. David's experience was the difference in the few close games they played."

"Karyl was putting balls down and Morgan was able to use her shot and deep shots to score at will," VanDePerre said.

The pair lost 0-2 (18-21, 18-21) to Jen Albrecht of Virginia Tech and Janis Dixon who are both competing on the AVP Pro Circuit. After falling behind 2-8 in the final match, Liberty was able to cut back the deficit to one before being closed out.

"They both played so well and were able to get playable touches on things and then convert those extra touches into points," VanDePerre said. "Karyl blocked well and then transitioned into more of a pulling game and got a lot of points that way. Overall, it was the best I have seen them play."

Also in the Women's Open Division, Liberty's Lydia Smith, a freshman, teamed up with her sister, Kirby Smith, and went on to finish third. Lydia Smith will pair up with teammate Brittany Tyree for the rest of the summer.

Three Liberty pairs competed in the Women's AA Division, though none made it out of pool play as the top two teams from each pool advanced. Juniors Madison Malat and Gabby Sunseri tied for second in their pool but did not advance based on the point differential tiebreaker. Sophomore Cali Anderson and freshman Ashlyn Whitt placed third in their pool. Liberty also fielded tandems in freshmen Hannah Hyland and Madison Riley and freshman Lindsay Barber with junior Caroline Bertholino.

Overall, VanDePerre was pleased with the team's performance.

"I think this was a great tournament to get us ready for next week's competitive field and also a good introduction for our 14 new players, out of 18 total, for playing such long days in the heat, which is a very challenging thing to do and not easy to prepare for."