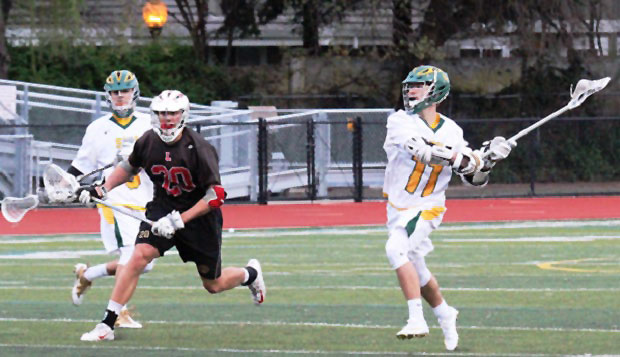 Erik Arvesen was a versatile midfielder/attack for the past four seasons at San Ramon Valley High School.

Erik Arvesen, a versatile midfielder and attack for San Ramon Valley High School in Northern California, would like nothing better than to help lead Liberty University's men's lacrosse team to its first bid to the MCLA Division I National Championships, held for the past two years in Southern California.

"Definitely, one of my goals coming into play is to make the playoffs and make it to Orange County and win the tournament," said Arvesen, one of a handful of incoming Flames recruits this fall.

He found out about Liberty through graduating senior midfielder Brett Bernardo, who served as coach of a Fellowship of Christian Athletes (FCA) travel team Arvesen played on last summer.

"Brett was able to establish a connection with him and he came in for our recruiting showcase (in November)," Flames Head Coach Kyle McQuillan said. "I'm excited about bringing a guy of his talent to Liberty. He'll be a utility player for us because he does a little bit of everything. He reminds me of Bryce Mrakovich and we'll be able to use him as a freshman."

Arvesen, who has played for Team NorCal and 3d Lacrosse, another travel team, especially enjoyed the FCA tournament in Veil, Colo., where he bonded with the team and Bernardo.

"That was probably one of my favorite tournaments I've ever played in," Arvesen said. "The coaches were really cool and I loved the spiritual aspect to it and the experience to meet with and play with guys from across the country. Meeting guys like Brett over the summer really helped influence me to come to Liberty."

He said the sport of lacrosse has grown rapidly in California, but it still has a way to go to catch up with programs in the Northeast.

"A lot of the MCLA teams from the West Coast are really good," Arvesen said. "It's definitely growing and where I go to school, it's a hot spot for lacrosse. It's a lot more competitive on the East Coast, but we're getting there."

He has watched highlights of Liberty's games and said his style of play is comparable to that of the Flames' starting midfielders.

"My level of competitiveness matches guys like Brett Bernardo and Bryce Mrakovich and I play pretty similar to how they play, with their dodging and shooting," Arvesen said, not intending to boast in his own abilities. "My personal motto is to work hard and to be humble."

Arvesen played baseball through the seventh grade and football until his sophomore year of high school when he quit that sport to focus on lacrosse. He loves the fast-pace nature of the game and the teamwork involved.

As a relatively new believer, he chose to continue his lacrosse career at Liberty not only to develop his game, and pursue a degree in business, but to expand his knowledge of the Bible.

"Knowing that Liberty is a Christian private school, and they're really serious about their lacrosse program and how competitive they are, I'm looking forward to it," said Arvesen, who plans to spend time in the gym over the summer to get stronger for his first season as a Flame. "It's what I was looking for and it'll be what I make of it."