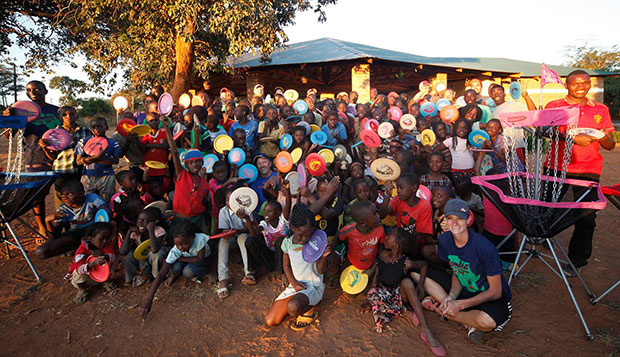 Some of the Zambian youth who participated in clinics led by Lance Brown and Hunter Thomas show their excitement.

Two members of Liberty University's disc golf team traveled to Macha, Zambia, from May 17-29 as part of a team of eight representatives of Eagles Wings — a branch of Push the Rock ministries based in Allentown, Pa. — that built the first disc golf course in that southern African country.

Lance Brown, a senior who placed sixth individually to lead the Flames to a best-ever seventh-place team finish at the National Collegiate Disc Golf Championships in April, and rising sophomore Hunter Thomas went on the trip, enduring a 15-hour flight into Livingstone, located on the border of Zimbabwe near Victoria Falls.

"It was mainly a work trip for us," Brown said. "We were there to do a job. It wasn't like mission trips I've been on in the past. We went there to put in the course, put on (afternoon) clinics for 40-70 kids, and show them love. We also trained the staff to pass on the skills and the know-how so they could have that as part of their outreach as well as soccer and basketball, the main two sports there."

Using makeshift baskets constructed from wash basins and chains welded to poles by Push the Rock Zambia staff, the team plotted out and cleared the path for the nine-hole course with machetes and dug holes to anchor the baskets and map signs, located beside two sets of tee pads.

"To set up the course and be on another continent was amazing," Brown said. "We all had a little part in the layout and the design. Most of the work was clearing the bush and the small trees. We had a dream of what it could be and it came to fruition in about three or four days, so that was awesome."

He said it is one of only two known courses in all of Africa, with the first being in Ethiopia. It is a very beginner-friendly layout with the longest hole just 240 feet from the longer tee pad to the basket.

Besides contributing to the course construction, Brown and Thomas helped lead clinics for hundreds of kids in the Macha village who were eager to learn the game, which is one of the fastest-growing sports in America, and the world. They were equally excited to introduce it to the youth of Zambia.

"It was cool just to see the joy of learning how to throw a Frisbee for the first time come over their faces," said Brown, who plays professionally on the Professional Disc Golf Association (PDGA) tour and will travel to the Tennessee's disc golf state championships this weekend. "Personally, the sport is like a job to me, and I don't often get to experience the fun side of it. It made me appreciate the opportunity I have to be able to play at a high level. It's a sport that provides joy for a lot of people, and I need to make sure I have that child-like joy and enjoy God's creation out there all the time."

The team brought and left behind over 100 lower-grade plastic discs that are easy for beginners to throw. A second mission team will bring another shipment of more durable discs in August.

Brown expects the sport to catch on quickly and to be an effective tool for evangelism, as an outreach of Push the Rock, which has as its primary goal to reach area youth with the Word of God.

"From such a remote area, I don't know how much it can spread, but it will be interesting to see if in a couple years there some villages in other parts of Africa that could set up more courses," he said. "That's what we're hoping. As a ministry, it is a way to get to know people and build relationships."

Liberty Head Coach Steve Bowman says the potential for future ministry overseas and in the United States is limitless.

"It's a great outreach for their youth, to get excited about and be active," Bowman said. "As a team, we're looking to be more spiritually aware of and take advantage of opportunities to be used by God, using disc golf to connect people."

Bowman and Thomas will travel to Emporia, Kansas, for the Aug. 6-13 PDGA World Championships where they will serve as volunteers on the course, representing Eagles Wings, and help lead a Friday night chapel service for the players, including Brown.

Bowman will also serve as director for the Commonwealth Games disc golf tournament, which will be played July 23-24on both the original 20-hole East Campus course and the newer one set up near the Outdoor Recreational Center at Hydaway.