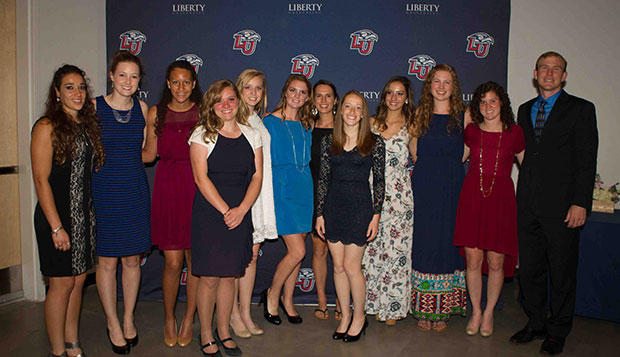 Members of Liberty's women's Ultimate team, honored at the Club Sports Banquet on May 3, have raised their cumulative GPA nearly one point since Fall 2014, to 3.56.

Club Sports student-athletes experienced continued success in the classroom this spring, raising their grade-point averages from 2.88 in 2015 to 3.05..

After helping to raise the cumulative GPA for all 500-plus Club Sports student-athletes above 3.0 in the fall, the academic enhancements implemented in 2015-16 resulted in all but one sport achieving a team GPA of 2.5 or better for this past semester.

The women's Ultimate team showed the greatest improvement over the past two years, raising its cumulative GPA nearly a full point — from 2.59 in the Fall 2014 semester to a Club Sports-best 3.56 this spring. Men's and women's triathlon ranks a close second with a cumulative GPA of 3.53. The synchronized skating team, which had a Club Sports-best 3.63 GPA this spring, finished in the top three in cumulative GPA (3.47) for the third consecutive semester with the first-year men's and women's cycling teams debuting in fourth at 3.38.

"I was interested to see how the spring was going to pan out, to see if it would stay on par with the fall, and it did, which was super exciting," said Sarah Morris, Club Sports' academic coordinator who works under Senior Women's Administrator for Club Sports Tatiana Payne. "That was encouraging. We were really able to reach the students effectively with all the new resources. It really has made a huge impact and I am excited about the results we have gotten. I look forward to next year and seeing what more we can do."

"We were making sure they knew the minimum (credits and grades) they needed to graduate and the mentors gave them accountability with their classes before senioritis hit," Morris said. "Besides offering study halls and mentoring, we made sure we were a bit more proactive with the students and their grades, to stay on top of issues before they became bigger problems."

Over the summer, Morris is developing additional resources to help incoming freshmen student-athletes start their academic careers on the right track.

"What we have in place is a good foundation to grow off of, and we're looking at more things we can do to better meet students' needs," Morris said, such as improving communication with and accessibility to department heads and professors.

She said arranging students' academic course loads around their respective teams' practice times and travel schedules is critical to assuring their success in both the classroom and the athletic realm.

"Playing Club Sports definitely requires students to be aware of their time-management skills, since they'll often be gone on weekends," Morris said. "We're setting up freshmen early for success with their schedules, making sure they are aware of their teams' travel dates and other conflicts."

Now that renovations are complete on the first floor of the LaHaye Ice Center, which also houses the Club Sports offices, study halls will be held there for the first time this fall, with conference rooms available for overflow tutoring sessions. Previously, the College of Applied Studies and Academic Success (CASAS) and the second-floor commons of the Jerry Falwell Library had been utilized for that purpose.

"I'm hoping we can bring some of those resources with us," Morris said. "It's kind of a big work in progress."