Megonigal could contend for NCWA national title as freshman 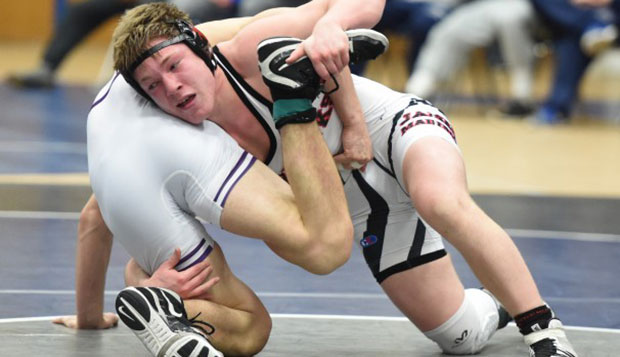 Of the several incoming recruits Liberty University wrestling coach Jesse Castro has lined up for this fall, T.K. Megonigal stands out from the crowd for his record of success at the high school and club levels.

A three-time state champion — twice at McDonogh Prep, a private wrestling powerhouse in Maryland, and once at James Madison High School, where he transferred for his junior and senior seasons — Megonigal has an impressive résumé, both at the state and national levels.

Megonigal was 38-9 with 15 falls as a freshman at McDonogh, wrestling at 106 pounds, and 32-9 with 16 pins as a sophomore wrestling at 113, winning Maryland Independent Schools State Tournament crowns both seasons.

At the March 24-25 Flo National Championships in Indiana, Pa., one of the premiere national tournaments, Megonigal placed second at 145 pounds, dropping a 3-2 decision in the final.

Competing for Prestige Worldwide, an all-star squad of sorts made up of Virginia high school state champions, Megonigal helped the team win its first six matches in decisive fashion at this past weekend's National High School Coaches Association (NHSCA) Battle at the Beach High School National Duals at the Virginia Beach Convention Center. The team finished 8-2 overall after going 2-2 in the championship bracket.

"I've been to a lot of national tournaments," Megonigal said. "I've been training like crazy since I was young. I started pretty much when I was in fifth or sixth grade, traveling to compete against different clubs around the country. By seventh or eighth grade, I was winning national titles."

He wrestled for the Virginia National Team and Virginia Team Predator, based out of Richmond and coached by Mark Strickland, who helped develop the fundamentals that set the foundation for Megonigal's youth success.

Megonigal hopes to follow in the path of former National Collegiate Wrestling Association (NCWA) individual champions Ryan Diehl and Josh Llopez, who helped boost Liberty to its first National Tournament team title in March of 2015 before moving on to the University of Maryland this past fall.

He expects to wrestle at 149 pounds and utilize his technical skills combined with speed and strength to challenge for a national title.

"I'm excited to be able to train at a prestigious program like Liberty," Megonigal said. "Realistically, I could win a national title with them this year. I aspire to be an NCWA champion and then I want to win an NCAA title (at Maryland) and to end up competing for Team USA (at the 2024 Summer Olympics)."