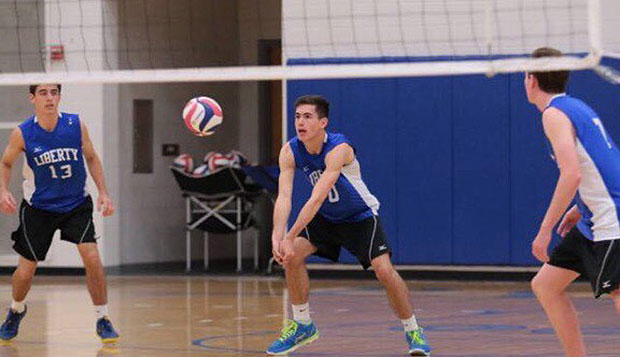 "They're all leaders of their respective teams, all really physically gifted, and I'm excited to see where they fit in," Rigg said.

Fleishmann just helped lead Damien, a private Catholic high school, to a second consecutive California Southern Section championship last week and it begins play in the state tournament on Tuesday. He has been selected as an All-League player and will represent his team in the June 4 All-Star game in Pasadena, Calif.

"Marco has the biggest upside after only playing for the past five years," Rigg said. "He took a big jump from his junior to senior year and is starting to realize his potential. If other schools had seen his videos from this year, he could have potentially been seeing some scholarship offers from Division I and II schools."

Damien assistant coach Andy Farrow, a former member of the AVP beach tour, has helped bring Fleischmann's hitting and blocking abilities to new levels and instill in him a love of the game. His Club West volleyball coach is Wes Schneider, the former head coach at Cal Baptist University. He has strengthened Fleishmann's mental approach to the game and will work with him this summer, using CrossFit and jump training to improve his athleticism.

"In club volleyball, we've definitely played some of the best teams in California and the nation," said Fleischmann, who, inspired by his paramedic mother Leah, plans to study nursing at Liberty. "I haven't been playing Eastern teams, just Western teams, so it's definitely going to be different. I'm excited about the change in playing style and ready for it. I can play pretty much any position in the front row, but middle's my specialty right now."

He likes the team aspect of the sport and wants to strengthen the continuity of the Flames.

"I just hope to bring the team up and add to what they already have, a different level of competitiveness," Fleischmann said. "I love that it's not an individual sport. Everybody has to work as a team to be successful and that really brings us all together."

Cuffee, who played basketball and volleyball for Lake Taylor High School, reminds Rigg of rising senior Gene DeJesus, a second-semester addition to the Flames' Division I squad who made an immediate impact at outside hitter.

"He can change a game," Rigg said of Cuffee. "He doesn't have a ton of experience, but he has a lot of natural athletic ability. During his senior year, guys on his team would set him wherever he was. There wasn't much of a game plan other than to set the ball high and let him go get it."

He was impressed with Liberty and its coaching staff when he visited this spring,

"When I was walking on the campus, the students were welcoming and the coach was very vocal and spoke with me every day," Cuffee said. "I'm a hard worker, and I'll be putting a little more work in this summer to get ready, on the court and with weights, to get stronger, faster, and better."

Hess, who played for Souderton High School in a suburb of Philadelphia, also brings a team-first focus and a diligent work ethic to the Flames. He could start on the Flames' Division II squad before moving up throughout his career.

"I might not get playing time right away, but I'm hoping to bring enthusiasm, hard work, and dedication to the team, just through all-out effort," said Hess, who plans to study health and physical education or Exercise Science before returning to his home town to teach at the middle school or high school level. "I like the team bonding aspect of the sport, that you get to play together and for Christ, to work together to accomplish the goal."

The 6-feet-2-inch-tall three-sport athlete also played basketball at Souderton and water polo for a club team. He has a summer job as a lifeguard and plans to play outdoor volleyball, lift weights, and work on increasing his vertical leap in his free time.

Koloff, who visited Liberty during the weekend of its spring season-opening Midnight Mayhem match against Virginia Tech, has put up blocks against NCAA Division I recruits bound for Ohio State while starting on the front row with his club team.

In high school, Koloff played for Olentangy Liberty, a public school team he was allowed to join since his private school did not offer the sport. He served as a team captain of that team for both his junior and senior seasons and was also a praise team leader for his private school. Koloff hopes to be a source of encouragement to his new teammates on the Flames.

"One of the things I am most excited about is to have a team that loves the Lord as much as I do, to have that connection on the team," said Koloff, who plans to study biochemistry at Liberty. "I think we'll have a lot more chemistry and I feel like I can provide a sense of consistency."