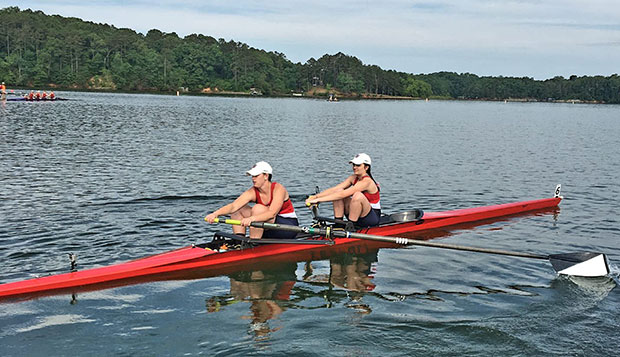 The tandem placed second in Saturday morning's opening heat in 8 minutes, 28.05 seconds, finishing the 2,000-meter race ahead of teams from Georgia, California-Davis, VCU, and Ohio State. Then on Sunday morning, the Lady Flames came in fifth, behind Athens State, Cal-Berkeley, Oregon, and Grand Valley State, in 8:43.57.

"My women's pair did very well to get to the grand final, which was very exciting," Liberty Head Coach Debbie Prowse said. "They've only been rowing for two weeks as a pair to transition to a boat with no coxswain, not having someone steer for them, tell them what to do, or encourage them, and to do that well was really amazing."

The women crossed the finish line fifth in 8:15.44 before placing third in Saturday afternoon's repechage in 8:22.36, needing a top-two finish to advance to Sunday's finals.

"There was no petite finals for the women because there were fewer boats entered," Prowse said. "They actually missed it by one place to Cincinnati (8:15.76). Being all novice this year, with no previous experience, they learned a lot and grew so much this spring."

The Flames' men's foursome placed sixth out of seven boats in 7:27.84 before advancing to Sunday's petite final with a fifth-place time of 7:21.50 in Saturday afternoon's repechage. They finished eighth in the petite final in 7:37.19, putting them in 16th position out of 21 boats overall.

"The guys' heats had some really fast times, with four boats — UC-Irvine, Rhode Island, and Michigan — breaking seven minutes (in the opening heat)," Prowse said "It was a great experience. They had a really good race in their repechage, their best racing all season. I was pleased. Both novice boats had their best races ever, so it was great that they ended on such a good race."