Flames made most of down time on spring break trip to Fla. 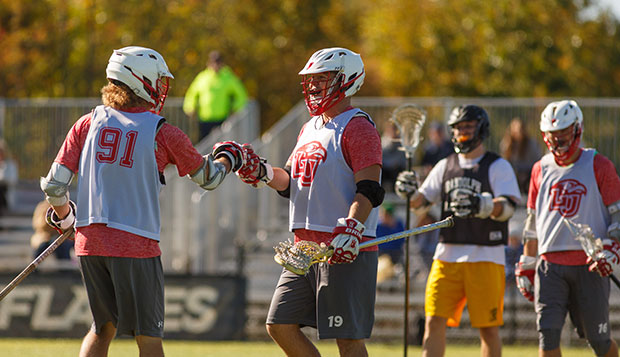 Liberty University Club Sports Video Coordinator Gabe Henderson traveled with the Flames' men's lacrosse team on its spring break road trip to Florida from March 14-20. Besides highlights from its games against Texas State, ranked 20th in the MCLA Division I national poll, SELC rival Florida State, ranked No. 22, and South Florida, he captured a behind-the-scenes look at team-bonding experiences on the week-long getaway from campus life.

"Anytime you have a group of guys for a good week, you'd better like them," senior attack Brett Bernardo added. "Especially coming out of the trip, you could be sick of them, but I'm not sick of my brothers. I love them to death and Liberty Lacrosse to me is just a brotherhood. It's a family."

The Flames finished 2-1 on the trip and went on to win their last three regular-season contests before being eliminated by No. 2-ranked Georgia Tech in the semifinal round of the SELC DI Championships, played near Atlanta. Despite being ranked No. 16 in the final MCLA DI poll, Liberty narrrowly missed the 16-team national championship field.