Crews ready for ACRA Championships in Ga. (with video) 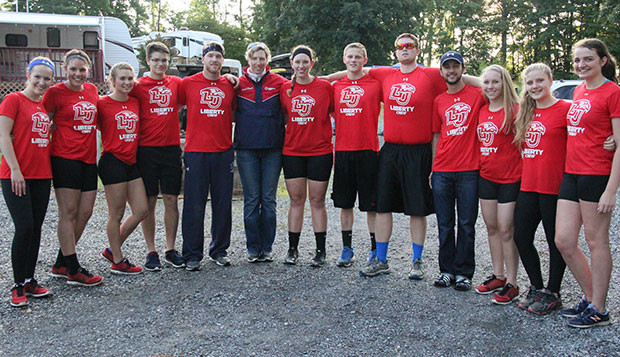 Many of the best collegiate club-level crew teams in the nation will test the waters one final time this spring at this weekend's American Collegiate Rowing Association (ACRA) National Championships on Lake Lanier, site of the 1996 Summer Olympic rowing events in Gainesville, Ga.

"They do have some really good competition (but) I expect them all to be competitive," Liberty first-year Head Coach Debbie Prowse said.

The women's varsity pair of junior Kathleen Lopp and freshman Moriah List must place in the top two of an opening heat that includes California-Davis, Ohio State, VCU, Georgia, and California to reach Sunday's finals. If not, the pair will race in Saturday afternoon's repechage with a second chance to advance.

"We weren't able to take a women's Varsity Four to nationals, but this is a very strong pair that rows really well together," Prowse said of Lopp and List.

The Lady Flames' Novice Four features freshman Savannah Perry at coxswain, senior Madeline Feden at stroke, freshman Rachel Peed at three seat, freshman Baillie Knecht at two seat, and freshman Emily Enochs at the bow. They must place in the top three of their opening heat against Oregon, Georgia Tech, Orange Coast, Northwestern, Grand Valley State, and VCU — a team it lost to by two seconds at its last regatta — to qualify for the finals.

"There are three experienced guys in that boat so I'm looking for them to be right there," Prowse said. "They have really helped lead the charge and really motivate the young guys and the new guys who have never had any experience. I am really looking forward to next year, those guys returning, getting more novices on the squad, and really just building up the team."