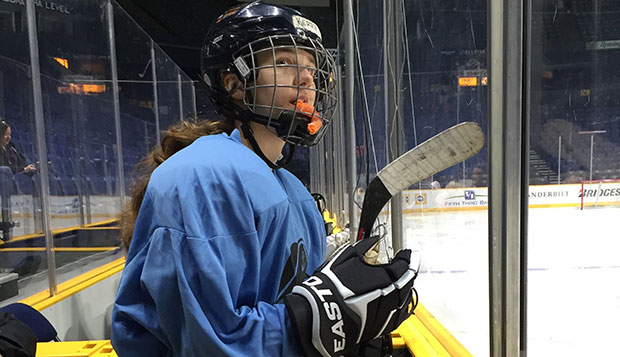 Liberty University ACHA Division II women's hockey Head Coach Sara Niemi attended a travel tournament in Nashville, Tenn., on a recruiting trip in February and two prospects in particular caught her eye — Kerry Morris, a defenseman from Nashville, and Morgan Dosterglick, a goalie from the U19 Indianapolis Fusion.

After visiting Liberty for College For A Weekend (CFAW) and skating with the team in September and April, respectively, both recently committed to play for the Lady Flames starting this fall.

Dosterglick started playing hockey when she was 3 on her grandfather's frozen pond, but didn't try her hand in the net until she turned 10. She has excelled at the position ever since, even playing on a boys travel team before joining the Fusion's U16 squad. Her coach said she was the best goalie in the Indianapolis-area league for this, her senior year.

"I watched Morgan play and I liked her lateral movement in the net," Niemi said. "She was quick to recover after a save and played with confidence. I am excited to have Morgan for the next four years and I know she will provide our team with consistency in the net."

Besides her quick recovery time and speed on the ice, Dosterglick said her flexibility, glove and blocker work, and puck vision rank among her strengths.

Morris attended Liberty's first girls' hockey summer camp in 2014. It was love at first sight when she stepped foot on the campus and onto the LaHaye Ice Center rink.

"I love liberty," she said. "I love everything about it, not only the campus, which is gorgeous, but the activities. There are so many things to do. As soon as I visited, I knew I didn't want to go anywhere else."

At the same time, she made an immediate impression on Niemi as a potential recruit.

"I saw a lot of natural talent then and continued to talk with her about possibly coming to Liberty to continue her hockey career," Niemi said. "She is what I would call a stay-at-home defenseman who does a really good job holding the blue line, but making sure she doesn't get burned by being too aggressive offensively. I will be pushing her out of her comfort zone as I want her to gain more confidence in her offensive play, by having more offensive rushes and crashing the net in the offensive end when needed."

Morris, who grew up playing soccer in the Philadelphia area before picking up hockey when her family moved to Nashville, prefers staying back, but will fill whatever role Niemi needs her to on the ice.

"I've always been more defensive-minded," she said. "Normally, I play on penalty kills and leave my other linemates to be on power plays. I just like to defend my goal at all costs, by being physical and staying at home and protecting the goalie."

She enjoyed the positive atmosphere generated by her future teammates during her CFAW visit and is looking forward to the challenge of playing against competitive opponents in College Hockey East (CHE), which includes powerhouses such as Delaware and West Chester.

"I think it will be a decent jump," said Morris, who enjoys the fast-paced, non-stop action of the sport.

Off the ice, the Nashville School of the Arts graduate plans to pursue a degree in Cinematic Arts or Journalism at Liberty.