Addition of DII squad a highlight of men's volleyball season 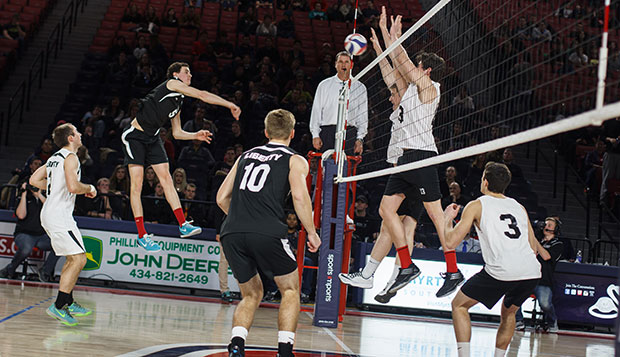 Josiah Hershberger, who graduated after his junior season this year, spikes behind graduating libero Josiah Williams (left) and middle hitter Luke Werth during a match at the Vines Center.

Culkin said the season as a whole was successful despite a few mid-year hiccups. One of the highlights was the debut of a Division II team to complement Liberty's DI squad. The Flames' DI and DII teams advanced to the silver and gold brackets, respectively, at the April 7-9 National Collegiate Volleyball Federation Club National Championships in Louisville, Ky.

"We were mostly freshmen with a couple underclassmen and we did awesome," Culkin said. "We won regionals, we got third in East Coast (Championships), and then placed 16th overall at nationals. Some of these guys had never been on that kind of stage before, but I'm really looking forward to the future with those guys."

Many of those players will move up to the DI squad starting this fall, when they will be complemented by at least four incoming recruits.