Liberty's triathlon will serve as final event of open series 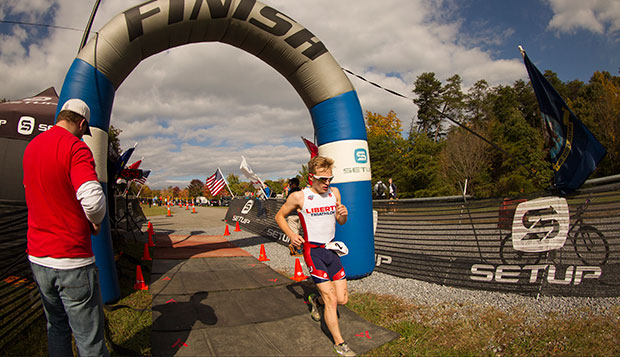 When Liberty University hosts the Mid-Atlantic Conference (MAC) Triathlon Championships for the third year in a row, Oct. 15 at Smith Mountain Lake State Park, it will serve not only as USA Triathlon's Mid-Atlantic Regional Championships, as it has the past two years, but also as the last of 32 races in the annual Virginia-Maryland Triathlon Series (VTS/MTS).

For the second straight year, there will be an open division and with the new affiliation, overall participation is expected to increase from around 300 to closer to 500 triathletes. The open category triathletes will be competing in the same races, but their start times will be staggered after the collegiate contestants.

"The fact that the Liberty triathlon is now a part of the VTS/MTS Series should really help grow the open category," Flames Head Coach Parker Spencer said, noting the series caps its races at 700 participants. "It was already an exciting race. What it does for the average open-category triathlete is to add excitement by being around collegiate athletes. The team camaraderie is really inspiring to see."

Spencer anticipates the top-level open triathletes will push the fastest collegiate competitors, who should still be among the race favorites since this event serves as the Mid-Atlantic Regional Championships.

Collegiate triathletes will also have the chance to challenge for VTS/MTS Series rankings by completing at least five of the 32 races, with three already on Liberty's spring and fall season schedules.

Mike Morrison, Liberty's assistant director of Club Sports who coordinates the water portion of the race with the Smith Mountain Lake Rescue Squad, works closely with Greg Hawkins, the race director who coordinates all of the VTS/MTS Series events. He expects the Liberty triathlon to run smoothly, even with the increase in numbers.

"He's a huge asset to us and he's been a great guy to work with," Morrison said. "He puts on a great show."

Spencer considers Hawkins one of the best race directors in the country.

"His races have been very popular and he always creates a very good environment," he said. "There are very few people I know that are as professional about it and have all the details down that he does."

Morrison is hopeful Liberty can extend its three-year contract on hosting the race, which ends this year.