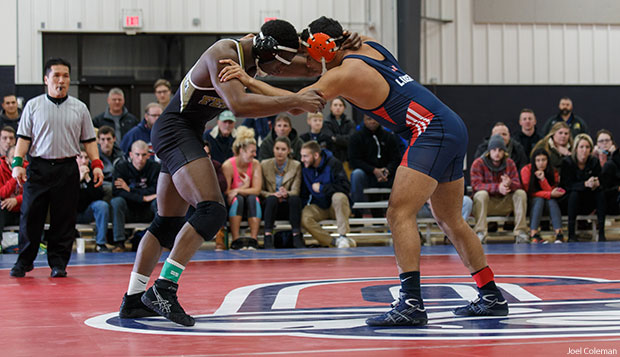 Liberty University's wrestling team, which has won two National Collegiate Wrestling Association (NCWA) National Duals tournament titles in the past five seasons and placed second or third the other three years, has been awarded a one-year bid to host next season's championships, set for Jan. 27-28.

The event has been held at the Dalton (Ga.) Convention Center for the past five seasons. Other cities have put in bids to host it, but no other major colleges have stepped forward.

"The NCWA has been pushing to get it on a college campus, but for some reason, no other school's administration has been supportive of hosting something of this magnitude," Flames Head Coach Jesse Castro said. "The university is really making an attempt to host events like this, including the Virginia Commonwealth Games," of which Liberty became the title sponsor this year.

"I want to express my appreciation to our administration, namely (Senior Vice President of Auxiliary Services) Lee Beaumont and (Club Sports Director of Athletics) Kirk Handy for making this a reality because it wouldn't have happened without them," he added.

Typically reserved for hockey and figure skating events, the LaHaye Ice Center will be transformed into a wrestling arena, as the primary site for the two-day competition.

"I think it's an ideal facility in terms of fan base, in terms of the event structure, and the physical facility," Castro said, noting in previous years, with no collegiate affiliation, the NCWA has hired out support staff to help run the tournament. "The help we're going to be able to generate from Club Sports will also be conducive to hosting the event."

The LaHaye Ice Center showcased its versatility at this past weekend's Commencement Exercises by hosting the School of Education's undergraduate and graduate degree presentation ceremonies, setting up chairs on top of an insulated covering over the ice.

"We're going to put six mats on there and might have two or three more mats in the LaHaye Multipurpose Center," Castro said, depending on the number of teams in the tournament field. "The NCWA might limit it to 24 or open it up to 32."

He would prefer to have the ice center host all of the matches, and is looking into ways to restructure the tournament's schedule so that it could be completed in two days on six mats with less down time.

Castro said the tournament could grow with the change in location to an area closer to wrestling hotbeds of Maryland, Pennsylvania, and New York. More teams might be willing to travel to the event, which awards points toward the NCWA Grand Nationals in March,which moved from Allen, Texas, to Kissimmee, Fla., this year.

"We should still get teams coming in from the Midwest like Michigan and Ohio and others from out West in California and we're hoping we won't lose any of the Florida teams that competed this year," Castro said.

Liberty has hosted two Mid-Atlantic Conference tournament championships in the past five years and will host its third in February after entertaining two NCAA schools in dual meets.

Castro hopes this will be the first of many NCWA National Duals tournaments held at Liberty.

"A lot of it will be determined by how we run it," Castro said, noting he has received plenty of positive feedback after hosting previous MAC tournaments. "It has to be a good experience for all the teams coming in and I think it will be. The amount of staff it takes to run a (MAC) national qualifier is one thing. To host a national event is another. We've never done it before. It's going to be quite an endeavor." 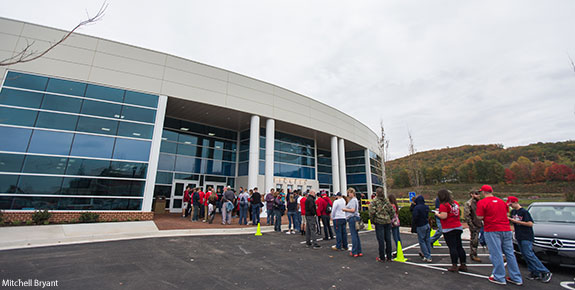