Bowman looks back on record-setting season, ahead to fall 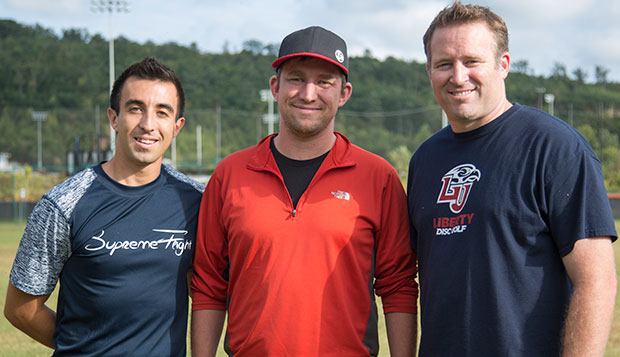 Head coach Steve Bowman (right) poses with professionals Paul McBeth (left) and Nate Sexton before they conducted a clinic on the South Campus Fields on Sept. 22, 2015.

"The team really came together at the very end and we had a lot of competitions leading into that for preparation," Bowman said. "We had a lot of guys that had played at those (Hippodrome) courses before so we had a lot of experience going into it that they could pass on to the younger players. That helped greatly, just their excitement, knowing what to expect, being in that environment before, that's huge. That played a lot into how they played together as a team and all that they did together."

This was the first year for the Flames to feature two All-Americans, Lance Brown and Hannah Croke, who finished sixth and fourth in their respective divisions. Both are seniors, due to graduate on Saturday, so Bowman is busy developing returning players and preparing to recruit new ones.

"It's exciting to see some of the younger guys that really were competitive, young kids that get it and want it that early, that helps," he said. "The biggest thing is to reach out to the guys that are coming in new next year, build those connections and invite them into that atmosphere."

Before then, Liberty will host a disc golf tournament for the 2016 Commonwealth Games on July 23, utilizing both 20-hole courses Bowman helped design on East Campus and near the Outdoor Recreational Center at Hydaway.