Spencer training for duathlon in Spain, triathlon in Germany 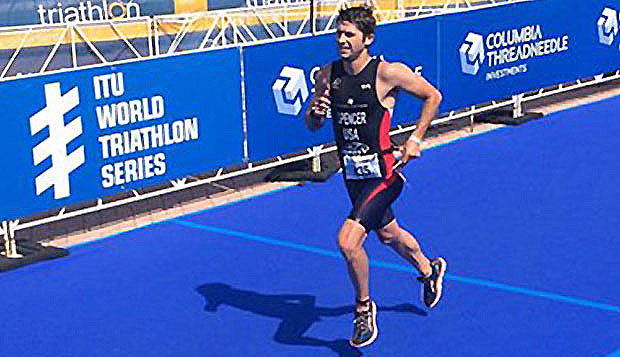 After traveling near Asheville, N.C., for this weekend's USA Cycling Collegiate Road National Championships, where sophomore Category A cyclists Jake King and Marie Sonnery-Cottet will challenge for national titles, Liberty University second-year triathlon Head Coach and first-year cycling Head Coach Parker Spencer will gear up for some adventures of his own this summer. Spencer has two trips to Europe planned over a six-week span when he will compete in a sprint duathlon in Spain and a distance triathlon in Germany.

For the fifth year in a row, he qualified for the International Triathlon Union (ITU) Age Group World Championships, at a draft-legal sprint triathlon held in Clermont, Fla., last November.

Spencer first traveled with former triathlon teammate Joseph Anderson and coach Beth Frackleton to New Zealand for the ITU Age Group World Championships in October 2012. Since then, he has raced in the same event held in London in 2013, Edmonton, Canada, in 2014, and Chicago last summer.

Spencer was slowed in his preparations for the Chicago race when he contracted a virus that affected his heart while placing 78th overall out of 2,157 participants in 4 hours, 42 minutes, 18 seconds at the May 31 Raleigh (N.C.) 70.3-mile Half Ironman Triathlon.

"I was in the hospital a while after the race and that significantly hurt my training for four months," he said. "I was ordered by my doctor not to work out in order to allow my heart to heal."
He still competed in the world championships, but didn't race to his potential, as his times showed. The medical setback has only increased his desire to recover and return to peak condition in time for the June 4-5 ITU Duathlon World Championships in Aviles, Spain.

"God's given me a gift and allowed me to go to places I'd never imagined," Spencer said. "When something like that happens to something you're passionate about, it makes you want to go into it prepared."

Spencer has ramped up his training regimen this winter and spring and is now in the best shape of his life. He expects a field of approximately 300 of the top duathletes in the world to be in Spain, for the sprint race with a 5-kilometer run followed by a 20K cycling stage and capped by a 2.5K run.

"It'll be a short but fast and technical race and there won't be much room for mistakes," said Spencer, the former Liberty track & field athlete who switched to the triathlon team for his senior year in 2011. "I haven't done many duathlons, but they definitely suit me better" than triathlons, noting he is an excellent runner and strong cyclist but not a fast swimmer.

After the duathlon, Spencer will continue his training with a long run in Barcelona, Spain, and bike ride along the Stage 9 route of the Tour de France in the Pyrenees Mountains.

That should spur on his preparations and heighten his anticipation for the July 17 Challenge Roth, an Ironman distance triathlon in Roth, Germany, featuring a 2.4-mile swim followed by a 112-mile cycling stage, and 26.2-mile run. It will include a field more than 10 times as large as the duathlon, with more than 3,000 participants, and will be one of the largest spectator sporting events in the world with over 300,000 people witnessing the race.

"It bigger than the Super Bowl over there," Spencer said. "It goes through a lot of different towns and cities and it's huge for the communities with as many as 60,000 people in one location along the course. When you look at pictures online of the environment of the race, any race I do after this is not going to be as exciting. It's a bucket list race."

It will be Spencer's first Ironman distance triathlon after competing in numerous sprint, Olympic distance, and half-marathon distance events.

Spencer will be running as part of a "SpeakUp" race team of 12 triathletes assembled by David and Grace Gallagher, who he met through Endorphin Fitness in Richmond, where he works. They started the Cameron K. Gallagher Foundation in honor of their daughter who died March 16, 2014, at the age of 16 after finishing the Shamrock Half Marathon in Virginia Beach.

"She was an endurance athlete for most of her life and didn't know she had a heart defect," Spencer said. "She ended up finishing the half marathon and having heart failure right after the race."

One way the Gallaghers coped with their daughter's death was by doing endurance distance races themselves, regionally and now internationally.

"It will be a real honor and special to be over there with them," Spencer said, noting that an orthopedic doctor and chiropractor are among the other team members. "They all have personal connections to the foundation and the cause behind it all. We're all going over together, going through the same travel agency and staying at the same hotel. My wife is going with me and we'll have a community there."

Spencer has saved more than $1,000 towards a goal of $5,000 for the Foundation, which raises awareness and financial support for the Children's Mental Health Resource Center.