Handy looks back on season, ahead with great expectations 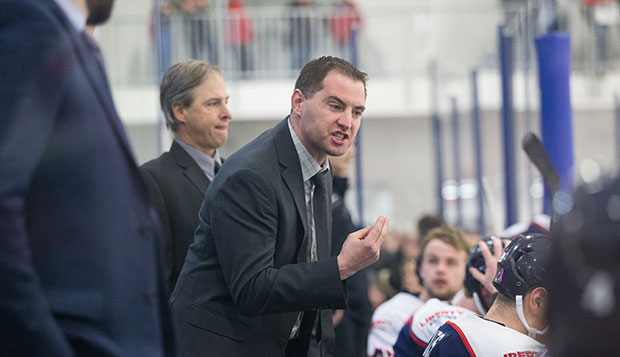 Now that Liberty University's ACHA Division I men's hockey team is in full offseason mode, Head Coach Kirk Handy recently had time for an interview with Club Sports Video Coordinator Gabe Henderson. Among other things, they discussed the 2015-16 season, the Flames' spring break trip to East Asia, and heightened anticipation over next year, when Liberty will add several new faces to its roster as it joins the Eastern States Collegiate Hockey League.

"We're looking forward to a great offseason," Handy said. "We've already got 10 players who are brand new that we're bringing in and we're still going to add about three more here to the mix before it's all said and done. We're looking forward to creating a new culture here and creating a level of compete which we haven't seen here in a while. That's going to be real important for us. I truly believe having the (renovated LaHaye Ice Center) for the full year will be a huge benefit for us as well."

"Obviously, playing the Chinese National team was huge and playing the other games over there was incredible as well," Handy said. "For me, the highlights were our guys sharing their testimonies with the other teams and opportunities for us to speak at schools over there."

He is excited about the upcoming season when the Flames will feature a tremendous mix of returning leadership and incoming talent.

"As I look around the room, I really like this returning team that we've got, a lot of guys who work hard and who want to compete and those are two great attributes for us heading into next season," Handy said, admitting last season left something to be desired. "It was an up-and-down year. We've put together a real good game plan on how we move forward in the future to be better. If you don't learn from situations like this, then you aren't going to get better as a program, so we've been learning and trying to do our part to make sure that we're in a great spot for next year."