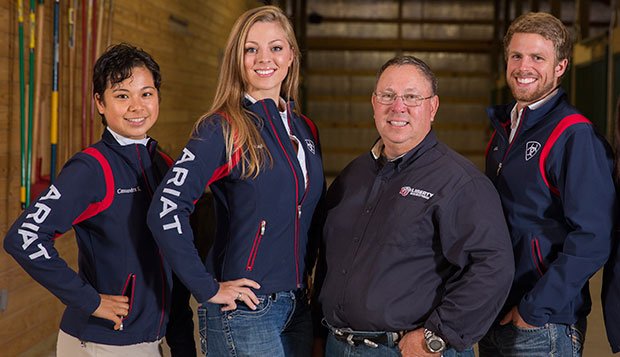 Micah Armbrust, a senior Western team captain from Columbus, Ohio, won the Emily Hilscher Memorial Award, named for an equestrian team member at Virginia Tech who was the first to die before the mass shooting that took 31 lives on the Blacksburg, Va., campus in April 2007.

Arrigon said out of approximately 12,000 collegiate riders from across the nation, only around 30 received IHSA scholarships, awarded annually, so to have two from the same school was unusual.

"Some are memorial scholarships, like the two our riders won," said Liberty first-year Head Coach Jim Arrigon, who also serves as secretary of the IHSA. "It is entirely fitting for a Liberty student to win the inaugural JT Tallon award, as JT was a close friend of mine."

He said the IHSA committee sorted through hundreds of applications, with recommendations from coaches and professors, and based its selections mostly on riders' academic performance and leadership skill.

"Both of these two are team captains for us, so that helped them," Arrigon said.