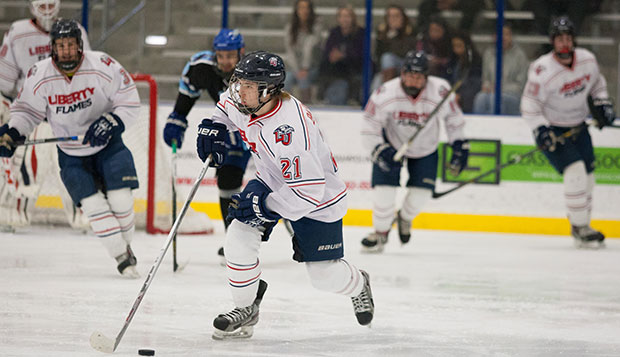 The Flames (30-4) lost to Florida Gulf Coast University in their first final in 10 years after winning three of four regular-season matchups with the Eagles.

"It was a very satisfying year," Lowes said. "We missed out on that last game and a chance to bring home a title, but all in all, just a lot of success on the ice and real proud of our team off the ice and the way we represented. It was very fulfilling."

Liberty was rewarded for its on-ice success at Tuesday night's fifth annual Club Sports Awards Banquet. The Flames were named Men's Team of the Year, senior forward and head captain Paul Ingles received The Champion Award, junior forward Devin Docksteader was honored for his Performance of the Year in the ACHA DII National Championship tournament, Lowes was tabbed Coach of the Year, and Mike Morrison was selected as one of two Assistant Coaches of the Year.

Team chemistry was evident all over the ice on Liberty's deep and talented squad.

"We had so many stories on our team, from guys that had breakout years to young guys, just all throughout the lineup," Lowes said. "We had, without a doubt, the best one-two goalie combination in the country. Our defense from top to bottom really came around. Coach Morrison gets a lot of credit for that. By the end of the year, we were playing really good defensive hockey, good two-way hockey. And then on forward, we just had guys contributing. Our top line I think is the best line in the country, offensively. We had a shutdown line that played against the best teams every night, (Christian) Garland, (Ryan) Kerr, Timmy Bierema, kind of the unsung heroes. Then, guys like Kaz (senior forward Peter Kazmierczak) who played with different wingers all year long, had a great year."

He said the Flames will take some time off to recharge in the offseason before stoking the fire within and finalizing personnel for another championship run next fall.

"We just stick to our focus as a team," Lowes said. "The results will come. It starts with finding the right guys, guys that fit in with what we're trying to do, understand what Liberty's about (and) what kind of team we're looking to build. We've been steadily progressing and to make it to the finals, there's only one step left. That's our ultimate goal, to try to take the next step and bring home the title."