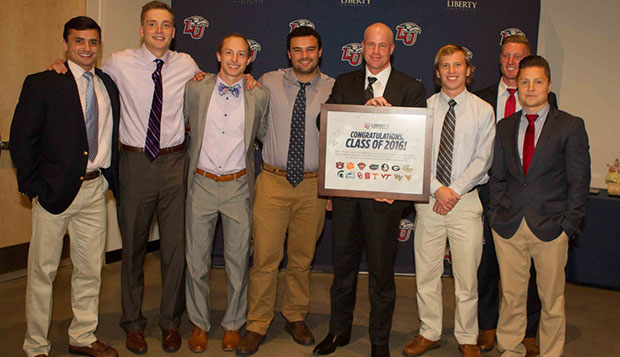 Members and coaches of the Flames' men's lacrosse team present Liberty Senior Vice President for Auxiliary Services Lee Beaumont with a plaque expressing their appreciation for his support of the Club Sports program.

From humble beginnings, Liberty University's Club Sports department has grown exponentially over the past eight years — from fewer than 100 student-athletes competing on six teams in 2008 to more than 500 on 35 teams in 2015-16.

More than 200 of those, including graduating seniors, scholar athletes, and award nominees, attended Tuesday night's fifth-annual Club Sports Awards Banquet, held in the LaHaye Event Space. A total of 125 student-athletes with grade-point averages (GPAs) of 3.5 or better and 26 more with GPAs of 4.0 or better were among those honored.

Two highlight videos, filmed and edited by Club Sports Video Coordinators Patrick Strawn and Gabe Henderson, captured the thrill of victory and the spirit of competition enjoyed by student-athletes in all of their respective sports.

That set the tone for the evening and the stage for the individual awards presentations, introduced by Mike Zumpano — who serves as lacrosse assistant coach and hockey public address announcer — and handed out Club Sports Director of Athletics Kirk Handy.

Division II men's hockey senior forward and head captain Paul Ingles was the first honoree on the night as the recipient of the newly created Champion Award, recognizing him for more than just his athletic performance, but also his dedication, commitment, and leadership qualities on and off the ice.

Ryan Miller, the senior attack on Liberty's men's lacrosse team and SELC Division I Offensive Player of the Year who ended his career ranked among the MCLA's top all-time scorers, was selected as the Club Sports Male Athlete of the Year.

The Lady Flames' Division I women's hockey team, which was ranked No. 1 in the nation all season long and reached the Final Four of the ACHA DI National Championship tournament for the fourth consecutive year, earned Women's Team of the Year honors.

Liberty's ACHA Division II men's hockey team, which went 30-4 and advanced to the ACHA Division II National Championship final for the first time in 10 years, was named the Men's Team of the Year while junior forward Devon Docksteader, who scored overtime goals in back-to-back games to send the Flames to the final, was honored for the Outstanding Performance of the Year.

Liberty Chief Information Officer John Gauger, Dr. Norman Mintle, dean of the School of Communication & Creative Arts, and his wife, Dr. Linda Mintle, an associate professor in the College of Osteopathic Medicine were among the honored guests in attendance along with Liberty Senior Vice President for Auxiliary Services Lee Beaumont.

"Lee's been the biggest support for me personally as we've championed the cause of Club Sports here at Liberty University," Handy said. "He has done a fantastic job of working with President Falwell and making sure that every day, the Club Sports mantle is carried through Liberty University, and that it's promoted in such a way that we are able to support student-athletes and coaches better every year."

Handy expressed his appreciation for the student-athletes' efforts on the playing fields and those of their coaches, athletic trainers, academic advisors, and strength coaches who help make Liberty's Club Sports program one of the nation's best.

"It's a privilege to serve you guys," he said. "We have a fantastic team. I'd like to thank our Club Sports staff that took our program to brand new heights and worked in conjunction with the coaches, the student-athletes, and the support staff to have our best year ever."