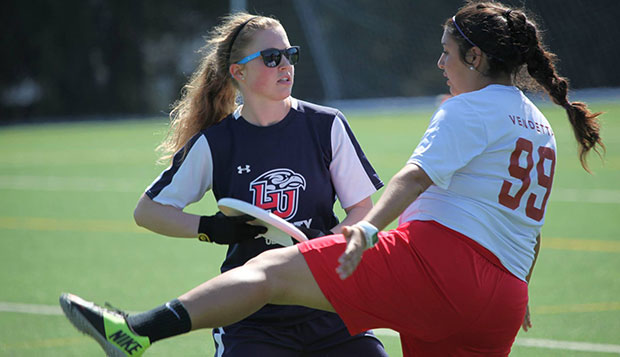 Sophomore Katherine Clarke tries to find an open teammate as she is guarded closely during Saturday's pool play.

The Lady Flames, making their third consecutive regional appearance, came in seeded ninth, but finished 3-2 to tie for fifth in an extremely strong field. Only the overall champion, the six-time defending champion University of Virginia, advanced to the USA Ultimate National Championships set for May 27-30 in Raleigh, N.C.

"Every year, we surpass ourselves," Lady Flames Head Coach Jonathan Mast said. "We were ranked 145th our first year, 118th our second year, 54th last year, and now 31st, so we have climbed the ladder pretty steadily."

Liberty went 3-1 in Saturday's three rounds of pool play and first playoff contest before having its postseason run end with a 15-11 quarterfinal loss to UNC Wilmington, played in a downpour with an hour-long thunderstorm delay.

"UNCW was ranked notably higher than us nationally," Mast said. "They're a tall team that handles deep throws well, but we traded back and forth with them and ended up taking a 10-9 lead before they broke us two or three times in a row."

The teams switched from a grass to a turf field after the thunderstorm delay and UNCW put the match away when play resumed.

"We definitely played better defense, but just couldn't convert on our defensive points," Mast said. "It was really heartbreaking because we've never been to the semis before, but I am very proud of all the girls, all the seniors. It was a shorter tournament than we would have liked, but we played better teams under more pressure and played considerably better on offense (than at the April 16-17 Virginia Division I Conference Championships at JMU, where the Flames finished fourth)."

On Saturday, the Lady Flames opened pool play with a 14-13 loss to fourth-seeded Maryland on double game point.

"We played a great game, very back-and-forth, and were up almost the entire game," Mast said, noting the Terrapins eventually tied it at 10-10 before taking advantage of a couple of breaks to surge ahead in the end.

Liberty took control of its second-game against JMU, a rematch from the sectional tournament, by halftime and won, 13-9. Junior handler Jillianne Hook made a layout defensive knockdown that broke a tie in that contest before the Lady Flames pulled away early from American, 13-6, sparked by a spectacular "Superman" lay-out grab by senior cutter Stephanie Albert in the Eagles' end zone.

"Our offense struggled at sectionals, but probably played our best at regionals," Mast said. "We worked in practice on offensive flow and they did much, much better. It was faster than it's ever been and in the UNCW game, we had seven lay-out catches on offense."

The Lady Flames finished second out of their pool and met Towson in the first round of bracket play, cruising to a 13-5 victory.

"They're a very tall team and they love to throw deep and trust their height," Mast said. "We took control of that early, forced their cutters under and prevented them from going deep."

Graduate Sydney Dawson, normally a handler, played cutter all tournament for Liberty and "had a phenomenal weekend," Mast said.

Graduate handler Krista Johnson led the Lady Flames in goals for the tournament while Jennifer Vachon distributed the most assists, followed by Hook and Johnson.