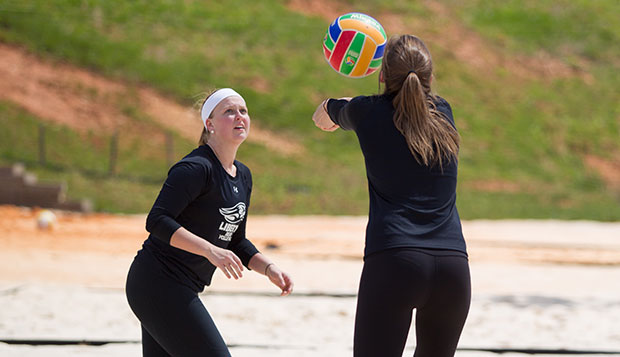 Eight of the 14 women's beach volleyball players on Liberty University's roster this season are new to the sport, which gave third-year Head Coach Rachel Willis a chance to school some of her players during Saturday's open tournament, played in wet weather conditions on the East Campus courts located beyond Liberty's Intramural Fields.

Willis, a former indoor player for the Lady Flames' NCAA Division I team, joined forces with Samantha Evans — who played on Liberty's tandem that went to last summer's National Collegiate Sand Volleyball Association (NCSVA) championships — to finish 7-1 in the tournament. They defeated the Lady Flames' freshman pair of Lydia Smith and Sarah Downs, 21-16, 21-14, in Saturday's final after rallying to upend Virginia Tech's Rachel Wadsworth and Morgan Sirbaugh in a three-game semifinal, 18-21, 21-18, 15-11.

It was the second time Evans and Willis paired up after also winning a tournament held in Greensboro, N.C., in December.

Willis said Smith and Downs, who only went 2-3 in pool play before finishing 4-4 overall, put up a good fight in the final after staging a semifinal upset of Lynchburg College's Jennifer Garrett and Amanda Perry — the duo that dealt Evans and Willis their only loss in pool play.

"Sarah is going to be really good," Willis said. "She never lets a ball drop without going after it and gets a lot of good touches on the ball. Lydia is a really tall left-hander who's hard to read when she's hitting. When they get more comfortable placing their shots and mixing up their hitting, they're going to blow through teams like us. I'm really excited about where they're going to end up."

Willis noticed marked improvement for both Liberty's women's and men's players since their last tournament played in snowy and windy conditions three weeks before on the same courts.

"Overall, for both the men and women, what we did was a big improvement," she said. "Almost every time we play a tournament, there's so much you're working on and progressing on, and they're taking the reps they're getting in practice and using them in tournaments. They've shown they've gotten the fundamentals down and are serving well and finishing points the way they do in practice."

The Flames have a month to prepare for their next competitions, the Blue Sky (June 5) and Southern Sand (June 11) tournaments in Apex, N.C., before traveling to Virginia Beach for a Big Money tournament on July 9 and competing in the Commonwealth Games on July 23. That's the same weekend Liberty will again take one men's tandem and one women's pair to the NCSVA National Championships in Huntington Beach, Calif.