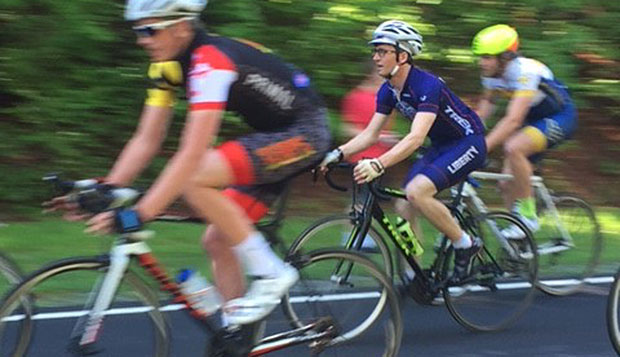 Liberty University's first-year men's cycling team, competing as a varsity program, finished seventh out of 22 teams and third — behind only Navy and Duke — out of nine Division II schools in the Atlantic Coast Collegiate Cycling (ACCC) standings.

"It's been an amazing first year considering we had one of the smallest teams out there," Flames Head Coach Parker Spencer said after six of his men's riders completed their season at this past weekend's ACCC Championships in Raleigh, N.C.

Freshman Khoi Tran crashed and did not finish. Schick, who was given clearance to race in the ACCC finals after breaking his elbow during a crash two weeks before, competed in both Saturday's road race and Sunday's criterium.

"Our guys did really well performing week after week," Spencer said. "It was definitely a success to compete with programs that have existed for years and years. This was our first year and, really, we did it with only two athletes with experience."

Those two are sophomore Category A collegiate cyclists Jake King and Marie Sonnery-Cottet, who will be Liberty's lone representatives in the USA Cycling Collegiate National Championships, May 13-15 in Marshall, N.C.

"At the national level, both of them have a chance to win or to place in the top three," Spencer said.

Although he only competed in four of the 14 races attended by ACCC teams this spring, King placed 12th out of 56 men's cyclists in Category A. Krohn placed 11th out of 41 competitors as the Flames' lone representative in Category B.

In Category C, where most of the Flames competed after moving up from Category D to start the season, graduate Joseph Anderson finished 10th in the individual rankings out of 59 men's riders, with Fouse (20th), Schick (21st), Ratliff (23rd), and Bartz (30th) also placing in the top 30.

Sonnery-Cottet finished 11th among Category A women despite entering only three races.

"If they had done all of the events, Marie and Jake would have finished in the top one or two," Spencer said, noting the focus of the two Charlottesville-area residents who study through Liberty's online programs, has been on training for nationals. "This is been what they've been preparing for. It's their big race of the year."