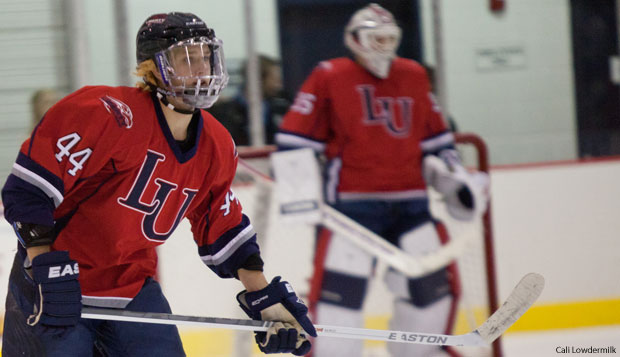 The Liberty Flames Division I men's hockey team could not overcome an early hole as the Robert Morris (Ill.) Eagles defeated the Flames 7-3 to conclude the 2012 American Collegiate Hockey Association Division I Showcase in Springfield, Ill., Sunday morning. Liberty finished the weekend showcase with an 0-3 record.

Robert Morris jumped out early as Mason Riley scored just 90 seconds into the game to stake RMU to a 1-0 lead. Brett Moser scored three minutes later to increase the lead to 2-0 before Kyle Garcia got the Flames on the board midway through the period and RMU took the 2-1 lead into the locker room.

The Eagles came out firing in the second and got three straight goals from Kyle Hamilton, Chris Pontello, and Tony Domico to push the lead to 5-1.

Rick Turner got the Flames on the board with his 19th goal of the season just six seconds into the third, as the teams traded goals in the final period, with Lindsay Leblanc adding one more for the Flames, and Gehrett Sargis and Christopher Cimoch scoring for RMU for the final margin.

The Beavers jumped out to a 2-0 lead thanks to a goal midway through the first from Eric Herbel and a shorthanded tally from the aptly named Michael Jordan late in the period.

MSU added to their lead in the second with a goal from Garrett Ferguson, before Turner broke up the shutout in the third on a nifty pass from Ryan Kerr.

"We learned a lot this weekend, most importantly, that it is a much faster game against the top teams in the country," said Flames Head Coach Kirk Handy. "We are going to have to learn to adapt if we are going to compete at a national level."

Liberty gets 12 days before its next matchup as 12th ranked Davenport comes to the LaHaye Ice Center for a doubleheader October 19-20 as part of Liberty University Family Weekend. Game time Friday is set for 7 p.m.