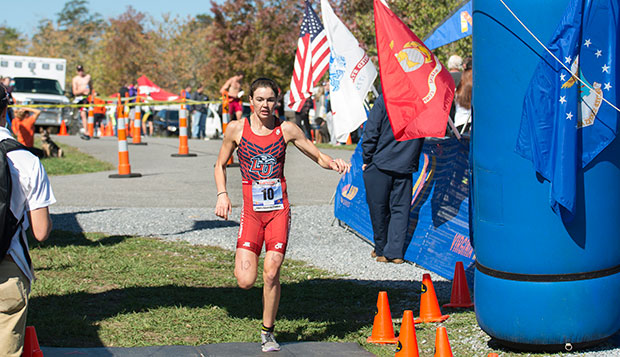 A year after being the first Lady Flame to cross the finish line, 163rd overall, Merryman repeated that feat, only at a much faster 21st-place pace of 2 hours, 26 minutes, 52.46 seconds. She saved her best performance for last, completing the 10-kilometer run in 44:14, the ninth-fastest time in the field of more than 500 female triathletes.

Merryman could qualify to compete in the NCAA Division I Draft Legal Women's National Championships in November with a strong showing at the Oct. 15 Mid-Atlantic Conference Regional Championships hosted by Liberty at Smith Mountain Lake.

"Now that she has two of these (draft legal) races under her belt, she definitely has the experience to compete at that level," Spencer said.

Liberty graduate Joseph Anderson did not compete in the draft-legal race, as he had the past three trips to nationals. But he still showed signs of dehydration in the mid-80-degree heat during Saturday's championship event after having a water bottle fall off his bike early in the cycling stage.

"He had a really rough race," Spencer said. "He was really struggling to keep a fast pace on the run and had to walk through the aid stations (to rehydrate). He basically used up all his energy during the bike race. Had been on the bike so long without any calories that he hit that wall and bonked."

"Travis has really come a long way and he has continued to improve week by week," Spencer said. "It was exciting to see his hard work pay off. He did really well."

"It was a good day for the team although it was a really tough course, with a lot more hills than last year," Spencer said. "This just shows that people are building off the fitness they gained this season and with the recruits we have coming in, next season looks even brighter."

"Adam (Williams) and Sarah (Parker) competed in their first national races," Spencer said. "It was definitely a shock to the system in an Olympic distance race. They were really just focusing on finishing, but they both did great."