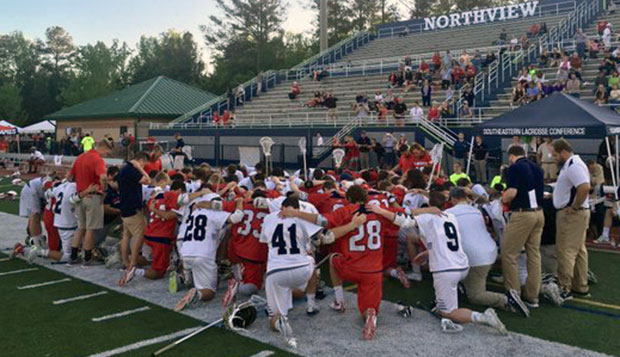 Players from Liberty and Georgia Tech pray after Saturday's SELC DI Tournament semifinal, a 13-6 setback for the Flames.

Liberty University's men's lacrosse team's quest for its first SouthEastern Lacrosse Conference (SELC) Division I Tournament championship in its third season since moving up from Division II ended the same way as last year — with a loss to Georgia Tech in Saturday's semifinal round. The Yellow Jackets, ranked second in the MCLA DI poll, raised their record to 13-0 with their second win over the Flames (9-4) this season, 13-6 at Northview High School in Johns Creek, Ga.

Liberty managed the only score of the first quarter and led 2-1 early in the second on goals by freshman attack Sam Gregory (three goals) off assists from senior attack Ryan Miller (three assists). But Georgia Tech responded by scoring the next eight goals unanswered to take a commanding 9-2 lead by the end of the third quarter.

"We followed our game plan to a T to start that first quarter," Flames Head Coach Kyle McQuillan said. "Unfortunately, Georgia Tech did find a bit of a rhythm offensively. We were successful in limiting their transition game but the second and third quarter got away from us due to their defense's and their offense's ability to be methodical and wear us down. They definitely earned their points today."

Liberty senior defender Brandt Grauss, who McQuillan assigned to cover the Yellow Jackets' most potent attacker, went down with a pulled hamstring early in the second quarter, removing a pivotal player in the Flames' defensive formation.

"Brandt's our best close defender and losing him hurt us a little bit early," McQuillan said.

He said the Yellow Jackets' swarming defense set the tempo of the contest from that point on.

"Offensively, we had a down day," McQuillan said. "We really weren't clicking. Georgia Tech was very aggressive on the defensive side of the ball and they disrupted our offense a great deal. They were keying in a lot on our heavy hitters like Bryce (Mrakovich) and Brett (Bernardo) and Ryan Miller, the offensive player of the year for the SELC, who they held scoreless today."

Georgia Tech junior Holland Frost, the SELC's faceoff specialist of the year, won 13 of 23 opportunities and the Yellow Jackets forced turnovers on a few of the 10 faceoffs won by Liberty senior midfielder Charles Fianko.

"They basically double teamed him and stripped the ball from him," McQuillan said. "Georgia Tech was phenomenal on ground balls. Their eight unanswered goals came from winning faceoffs, gaining possessions, capitalizing on our mistakes, and scoring on their opportunities."

Freshman goalie Matt Nichols made 12 saves, holding the Yellow Jackets scoreless in the first quarter, but allowed 12 goals in the final three before fellow freshman Brayden Harriman allowed the last one, also making one save.

The Yellow Jackets pushed their advantage to 11-3 before Gregory completed his hat trick by taking a feed from Miller, circling around the cage, and scoring from a tough angle. The Flames trimmed the deficit to 11-6 on back-to-back dodges and goals by senior midfielder Mrakovich and sophomore attack Nick Lombardozzi. However, Georgia Tech responded with two goals in the closing minutes of the fourth quarter to clinch a berth into Sunday's championship game against two-time defending SELC Tournament champion Virginia Tech.

"Overall, our offense lacked the ability to not only control the game but to keep pace with Georgia Tech today," McQuillan said. "Teams underestimate (the Yellow Jackets') defensive capabilities and how their offense feeds off that. I think they're going to be very competitive at the national level."

Liberty, ranked 15th in the nation, still has hope — McQuillan considers it a 50-50 possibility — of receiving an at-large bid to the 16-team National Championships, May 9-14 in Orange County, Calif., as the highest-ranked team in the SELC besides the Yellow Jackets, who are all but assured a bid.

"Georgia Tech is a lock, and if we're thinking of going to California ourselves, we'd like Georgia Tech to go on and win the SELC tournament," McQuillan said. "The last two years, we've been a bubble team, on the edge, but left on the outside looking in. We're ranked 15th but with all the automatic qualifiers, a lot of things have to happen the right way for us to get to nationals. We knew taking care of business in the SELC playoffs was the only way we could control our own destiny and now it's up to other teams and the National Selection Committee."