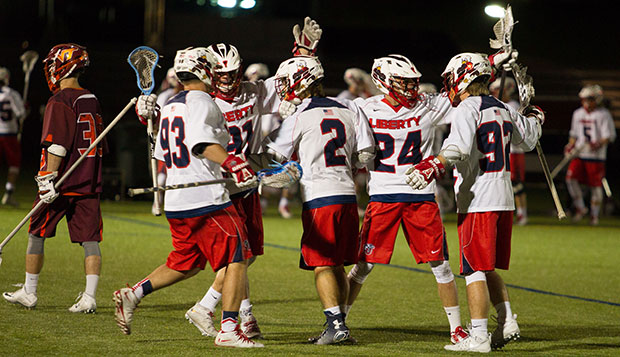 The Flames celebrate a goal in last Friday's regular-season-ending win over Virginia Tech, a team they could meet in Sunday's SELC final if they can get past Georgia Tech.

An hour-plus-long lightening delay nearly extended Liberty University's SELC Tournament opener against South Carolina into the midnight hour. The Flames lit up the scoreboard early and often in the first half, taking an 8-2 lead into the intermission before holding off the upset-minded Gamecocks, 12-9, Friday night at South Forsyth High School in Johns Creek, Ga.

"The officials were threatening to have us finish it in the morning, so we were fortunate we got the game in," said Liberty Head Coach Kyle McQuillan, whose 15th-ranked team advances to challenge second-ranked Georgia Tech, a 15-5 winner over Central Florida, on Saturday at 5 p.m. at Northview High School.

"Ryan Miller had one of his best playoff games he's ever had," McQuillan said. "He had an eight-point night, which is fantastic. He was a big part of the offense today. We were finding a lot of success early on the crease. Their goalie (senior Dimitri Pecunes) is one of the better we've faced all season and we knew shooting from the outside wasn't going to be effective. We needed to get it inside and bury some high-percentage shots from in close and the guys followed the game plan and got the ball in tight and started wearing him down."

Liberty's initial strategy against the Gamecocks was to try to push the ball on fast breaks and capitalize on USC's transition defense.

"They played good transition defense tonight," McQuillan said. "We did have a couple fast-break opportunities, but the majority of our points came in seven-on-six situations, with off-ball movement, cutting and slides. They weren't recovering on the two and three slides and that left some openings on their side. The interior of the field was a great opportunity location for us tonight."

"Bryce did a great job tonight setting guys up and creating opportunities," McQuillan said. "He also led the team with five ground balls at key moments."

The Gamecocks capitalized on back-to-back slashing penalties to score twice in man-up situations late in the third quarter to draw within 9-5.

"They took advantage very quickly and those two penalties jumpstarted their offense," McQuillan said. "They started getting some success in the third and early in the fourth quarter. We were trying to slow the game down and protect that lead and they started shooting low and finding some weaknesses on (goalie) Matt Nichols, who overall played a great game."

Nichols made 15 saves while allowing nine goals for a 62.5 save percentage.

"Definitely, early on, it was Money (Nichols) making really great saves for us that allowed us to take the lead," McQuillan said.

Miller netted a spectacular 360-degree goal off an assist from behind the cage from Gregory to extend Liberty's advantage to 10-5 at the end of the third quarter.

"That was a great shot," McQuillan said. "He rotated with the 360-degree shot into the top corner from in front of the net. It would have been next to impossible for any goalie to track a shot like that, trying to figure out when it's coming off the stick."

A perimeter bounce shot by Bernardo and a point-blank finish by Gregory off an assist from Miller put the Flames up 12-7 late in the fourth quarter, all but sealing the victory.

On the defensive side of the ball, senior defenseman Brandt Grauss played a critical role.

Senior midfielder Charles Fianko won 12 out of 25 faceoffs, well below his average.

"Chuck struggled a little bit against a guy that caught him off guard," McQuillan said. "He won less than 50 percent, which played into the reason why game was as close as it was."

The Flames must win the faceoff and time of possession battles against the Yellow Jackets to have a good shot of staging the upset against one of the top defenses and goalies in the MCLA.

"The game plan for (Saturday), essentially, is we know we have to make it a defensive battle," McQuillan said. "Their strength is their defense, but their offense is nothing to shake a stick at either. We definitely have to keep the score low. I don't think we're going to find success getting into a shootout with Georgia Tech. Our defense has got to step up and stand toe-to-toe with the best defense in the SELC."

He said the goal is for Liberty's offense to score in double digits and for its defense to hold Georgia Tech to single-digit scoring.

"We've got to keep the possession pretty even and make sure, if we're up by a goal or down by a goal, we don't rush things," McQuillan said. "We've got to be patient and take advantage of our possessions."

Senior goalie Matt Sommerfeldt has allowed only 40 goals in 12 games this season and boasts a 71.0 save percentage to help keep the Yellow Jackets undefeated.

"He's the best goalie in the SELC and, in my opinion, the best in the country," McQuillan said. "We've got to get the ball in tight and take high-percentage shots, though Georgia Tech is going to be a lot stingier on defense. We're not going to have as many opportunities as we did tonight."

Live webcasts of Saturday's two semifinal games — including two-time defending tournament champion Virginia Tech against Georgia at 7:30 p.m. — and Sunday's 3 p.m. championship are available on a pay-per-view basis on the SELC website. The winner will earn the SELC's automatic bid to the May 9-14 MCLA National Championships in Orange County, Calif.