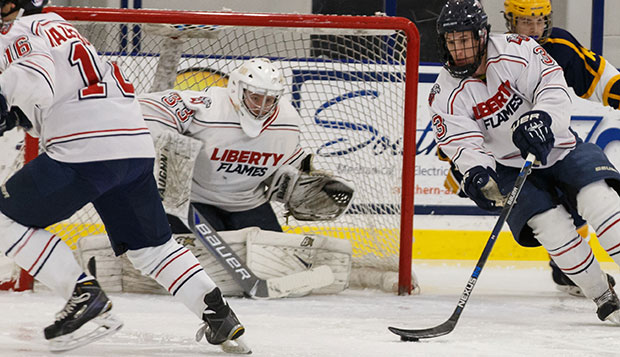 Blake Scott went 13-2 with a GAA under 2.00 and a save percentage above 94 as a freshman on Liberty's DII team.

When he didn't make Liberty's ACHA Division I squad during tryouts this past August, Blake Scott was undeterred. The former three-year starting goalie with the Hampton Roads Whalers Junior "A" 20-and-under team used it as motivation to raise his game to a higher level.

"I wanted to be on the Division I team this year, but I didn't expect to get as many opportunities as I did (with DII) so I made sure I worked hard and played the best I could," Scott said. "More than anything, it helped me stay a lot more confident and brought my game up a lot more. I would say I did what I could to take it to the next level."

Scott, from Chesapeake, Va. experienced a phenomenal freshman season on the Flames' Division II team, leading it to the ACHA DII National Championship final by making 53 saves in a 2-1 overtime triumph over Miami of Ohio in the semifinals. For the regular season, Scott went 11-2 with a 1.95 goals-against average and a 93.8 save percentage, comparable numbers to graduate Blair Bennett (6-0, 1.83 GAA, 93.6 SP), the former Division I goalie who played his final semester of eligibility with the DII team.

"Blair Bennett was very helpful, always giving me pointers in practice," Scott said. "He was a good mentor. He always said the right things to me before a game. It's hard to beat a goalie duo with what we had."

Scott will be one of three goalies on the DI roster next season, with rising senior Matt Pinel the projected Friday night starter. He established strong rapport with his future teammates during the March 31-April 2 Flames Hockey Recruitment Camp held at the LaHaye Ice Center, where he was officially promoted to the DI team for next season.

"All I was told is the hardest-working goalie's going to play," he said. "Everybody's very friendly and down-to-earth. Everybody's making sure I'm comfortable and have what I need. We'll have a good defensive corps next year, with some solid defensemen coming in, and I'm happy about that as a goalie."

Scott will have three seasons of DI eligibility and plans to use them all, and have one left over for a final season with the DII team, as his mechanical engineering degree will likely require five years of study. A problem-solver interested in biomechanics technology, he said hockey has helped him stay on task and manage his time effectively as a student-athlete.

He is excited to study under Flames Assistant Coach Dan Berthiaume, the former NHL goalie who was inducted into the ECHL Hall of Fame this past winter after playing with three ECHL teams from 1994-2003, including seven seasons in nearby Roanoke, Va.

"We've been talking all spring and are really excited to work with each other over the summer and all next year," Scott said. "He'll work with me one-on-one to see what problems I have to work on and how we can fix them. Individually, I'll be working hard, skating just about every day to make sure I come back to school in the best shape possible."

"I'm just very reactive," he said. "I react to every shot. I don't just block it. I'm kind of like (Quick) in the way he moves around in the net and how he does the splits a lot. I'm very quick down low with my pads."

He sharpened his mental game as a freshman on the DII Flames.

"It's something I had to learn because the goalie position is 90 percent mental, as the last line of defense," Scott said. "You have to have confidence. Being in net throughout my whole life, it doesn't seem to bother me anymore. It's another day in the office, pretty much."

He hopes to make an immediate impact on the DI team, as he did this past season with the DII squad, helping it reach the Final Four at nationals for the first time in 10 years.

"I think I can bring the compete level to the team and be a good role model by working hard," Scott said. "Hopefully, that will make the other guys work a little harder in net. We want to at least make a run to nationals this year with the DI team, and my goal is to do what we did with the DII team this past year."

He doesn't expect the transition from the DII to the DI level to be overwhelming.

"From a goalie's standpoint, I'm going to have to adjust to shots that are going to be more accurate and the game speed which will be faster," Scott said, noting playing against teams like Florida Gulf Coast University, which defeated Liberty's DII squad in the championship game, has prepared him well. "We were such a high-end DII level team, and I got a little bit of a taste of what it's going to be like at the DI level."