Men's cyclists gear up for ACCC championships at NC State 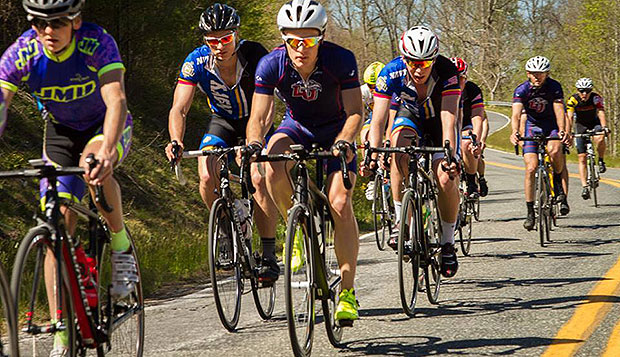 Ratliff, who studies through Liberty's online programs, will miss Sunday's criterium, as he has throughout the season, to attend to his day job as pastor at Clearbrook Baptist Church in Roanoke.

The Flames are coming off one of their better weekends of racing this season at Appalachian State University in Boone, N.C., where Fouse and graduate Joseph Anderson placed fourth and fifth, respectively, in the road race before Anderson finished third in a criterium held in Wilkesboro, N.C.

"During the road race on Saturday, Joey held a breakaway for 12 miles before he was caught, settled in a group and still came out with a fifth-place finish," Liberty Head Coach Parker Spencer said. "Wesley ended up beating him and coming in fourth, literally a half a second apart. They crossed the finish line together."

Anderson became sick after Saturday's race, but was revived in time for Sunday's criterium.

"After the road race, Joey was throwing up for a couple of hours," Spencer said. "He went back to the hotel and went straight to bed and the next morning, he ate breakfast and went out and pushed the pace for the majority of the event again and ended up in third place."

Tran, who blew out a tie in Saturday's road race, and Barch had their best races to date on Sunday.

"I'm really starting to see them go from athletes who are just starting out and don't have a lot of race experience, to where you can tell they've done this before," Spencer said.

He said the team has benefited from a season of competition on a variety of courses — from mountainous roads near West Virginia University (April 2-3) to technical city streets at the Naval Academy (April 9-10) in Annapolis, Md., and the University of Maryland (March 12-13), right outside of Washington, D.C. — helping them to develop their racing tactics.

"Our guys have had experience on a lot of different types of terrain," Spencer said. "You can be the fittest rider and not win the race because a lot of it has to do with strategy. They've found that they can't just go out and ride as hard as they can from the start."

Sophomores Jake King and Marie Sonnery-Cottet, Charlottesville-based students pursuing degrees through Liberty's online programs, will not be at this weekend's ACCC championships, but will be Liberty's only representatives at the May 13-15 USA Cycling Collegiate National Championships.

"Instead of racing every weekend, they've been spending their time getting some really solid training in to be able to peak at nationals," Spencer said. "Both are looking strong and I'm excited to see them race in Marshall, N.C., in May."

He hopes to take the Flames to nationals as a team next season by seeing them move up from Category C to A status at the collegiate level.

"Our goal for this summer is to have guys compete in some regional amateur races and be able to category up so they can come in next season and we can have a full collegiate A team to race at nationals next year," Spencer said.