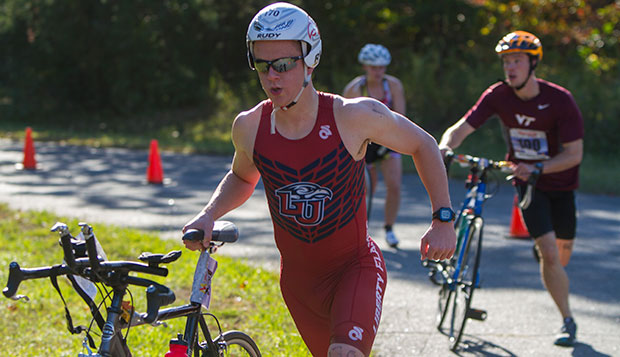 The event included a 750-meter swim, a 20-kilometer cycling stage, and a 5K run, with triathletes completing the course in a torrential downpour.

"There were thunderstorms later in the day, but they still held the race, and it actually ended up being a lot of fun to race through the rain," said Liberty Head Coach Parker Spencer, the race's overall winner in 46:57, eight seconds ahead of Anderson. "Everybody enjoyed that and had a good time."

Flames freshman Travis Fehr, from Ontario, Canada, placed third among collegiate men and 10th overall out of 293 participants in 50:03.

"Travis has really come a long way and he really surprised me at that race," Spencer said, noting his debut with the Flames last fall was his first open-water swim. "He had a very strong showing and his hard work has really started to pay off. Now, he's one of top guys on the team. He's a strong swimmer, and he's getting stronger and stronger every week.His bike time has improved and he has really blossomed as a runner."

On April 9, the team traveled to the Belews Lake International in Stokesdale, N.C., where weather was again a factor.

"It was very cold and very windy and five minutes before the start of the race, they canceled the swim because it was so dangerous," Spencer said, noting that race officials turned it into a duathlon of two 5K runs with a 27-mile cycling stage in between.

"It was one of the worst conditions I've ever experienced for a triathlon and I was proud of our team for getting through it," Spencer said.

Merryman will be the only Liberty triathlete racing in Friday's Draft Legal sprint race in addition to Saturday's championship event that will start with a 1,500-meter swim followed by a 40K cycling stage and 10K run on new courses after last year's event had to be rerouted due to a "5K Color Run" being scheduled on campus on the same day.

This will be Anderson's fifth and final time competing at collegiate nationals, so he may have an experience advantage on the competition.

"Joey's been training very hard," Spencer said. "His bike and run are at all-time bests right now and he's maintained his swim. I'm looking forward to seeing him race there once more."