Three-year defensive captain Cruickshank has all the tools 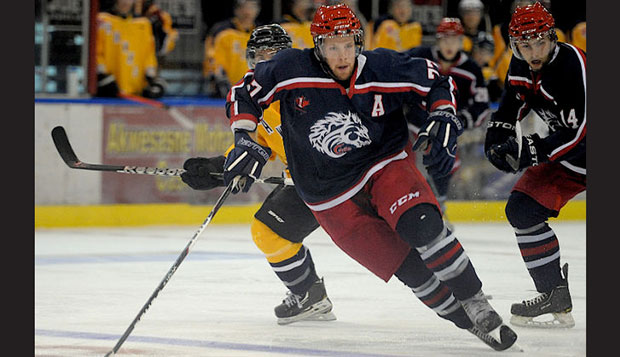 Matt Cruickshank emerged as a scoring threat for the Kitchener (Ontario) Junior 'B' Dutchmen last season, scoring 16 goals and distributing 21 assists to lead the team to a 48-3 record.

When Matt Cruickshank visited Liberty University over the Flames' Hockey Recruitment camp, which coincided with Liberty's College For A Weekend (CFAW), it was like visiting heaven after previously only reading or hearing about the place.

"It was honestly pretty amazing," said Cruickshank, a 6-foot-1, 205-pound, 20-year-old defenseman who committed to join the Flames' ACHA Division I team on site. "I had seen pictures online, and it looked great, but going down to see everything, it was like it was a dream."

"If I wasn't playing hockey, I'd still want to go to Liberty," he added. "I'm excited to become a better hockey player, but I also want to grow in my faith and as a person. Liberty is where I am meant to be."

Currently a full-time freshman psychology major at Wilfrid Laurier University in his hometown of Waterloo, Ontario, Cruickshank played spring hockey last year with Liberty freshman forward Jeff Wilson. He was happy to meet the rest of the Flames and other incoming recruits at the weekend camp.

"They're a bunch of class acts, which made it a whole lot easier to play hockey," he said. "The guys they brought in all seem amazing. Everyone works hard. They're great guys and great players and the coaches all seem very smart and welcoming. Everyone's clicking and on the same page. It's definitely good hockey, and I'm excited to get into it. It's going to be a long offseason because I just can't wait."

After playing Junior "A" tier II hockey for the Cornwall Colts in 2013-14 and for the Ottawa Senators' Junior "A" team in 2014-15, Cruickshank just completed his first season with the Kitchener Junior "B" Dutchmen. He helped them to a 48-3 regular season by scoring 16 goals and distributing 21 assists, both career highs for the usual stay-at-home defenseman.

"I'm physical and a shut-down guy, which is how I've always been," Cruickshank said. "I'm a penalty kill guy and have led every team I've played on in the past four years in blocked shots. I love it. It's always team-first. We're all brothers."

Cruickshank has served as an assistant captain for the past three years, and was named captain of the Junior A league All-Star team in Canada last year.

"I bring off-ice leadership," he said. "I'm a pretty steady defenseman. I'm very vocal, and I try to stay positive."

Cruickshank expects a smooth transition to the college game.

"Whenever you move, from minor to junior, junior to college, college to pro, there's always a jump, with extra speed, experience, maturity, and strength," he said. "At camp, it was harder because everyone's older, stronger, and faster. You have to get used to the speed on the ice and the strength. I'm ready, and I can't wait."

He has worked three jobs to help pay for his college expenses — at a sporting goods store, for a construction company, and with a hockey camp. He wants to become a teacher for children with disabilities and has found time to serve as volunteer with the Special Olympics. That's been as rewarding as anything he's done, including playing on Team Canada's East squad in the World Junior "A" 16-19-year-old Challenge, held in Yarmouth, Nova Scotia, before Christmas in 2013, when he was 18.

"That was an amazing experience playing for my country, even though we lost to Team USA," Cruickshank said. "I'm about the only player from that team not to be drafted into the NHL. There were hundreds of NHL and college scouts in the stands. It was definitely amazing to go onto the ice and wear the red and white for Canada. Everywhere you'd go, you were treated like gold."

He is looking forward to playing in front of packed houses of up to 4,000 fans at the LaHaye Ice Center.

"It's crazy how at Liberty the fans are into it, and everyone is crazy about hockey," Cruickshank said. "That's very exciting. Everyone's close as a team, and it's a long season, so it's going to be huge to have that level of support from in the stands, like our extended family."

He believes the Flames have the talent needed to not only return to the ACHA Division I National Championships after a rare absence last season, but also to contend for their first title.