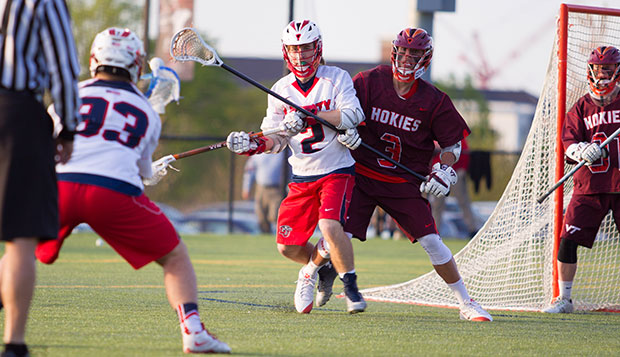 Heading into this weekend's SELC National Championships in Johns Creek, Ga., north of Atlanta, Liberty University's men's lacrosse team moved up two spots to No. 15 in this week's MCLA Division I poll.

The Flames surged ahead of SELC rivals Virginia Tech, which slipped two rungs to No. 17 after being routed by the Flames, 15-7, in Friday's regular-season finale, and Florida State, which dropped five positions to No. 16 after being suspended for the rest of the season due to some off-field incidents.

On Senior Night against Virginia Tech, nine graduating players capped their careers undefeated at the Liberty Lacrosse Field, where the Flames extended their winning streak to 23 games.

"To play at home for four years and not lose a game and to cap it off against our program's biggest rival, it's the right way to head into the SELC Championships," Liberty Head Coach Kyle McQuillan said. "We're trending up, and it's exactly what we need to be doing."

The final score was the same count that the Hokies had defeated the Flames by in last season's regular-season final in Blacksburg, Va.

"Poetic justice plays its way in sometimes," Liberty Assistant Coach Mike Zumpano said. "The last few games, we've been trying to build toward that and this game's just another stepping stone (to an SELC tournament title). Either way, we're going to have to go through Georgia Tech and probably Virginia Tech as well."

Only the tournament winner is guaranteed a trip to Orange County, Calif., for the May 9-14 MCLA DI National Championships, though the SELC normally gets one at-large bid to the 16-team field. Even if the Flames finish ranked in the top 16, that will not assure them their first national tournament berth in their three seasons since moving up from the MCLA DII level, where they reached the Final Four in 2013.

"We recognize the SELC championship is the only thing that's going to get us to nationals," McQuillan said, noting Liberty didn't give itself much of an advantage by wrapping up the No. 1 seed out of the Northwest Region with the triumph over the Hokies.

"Taking a look at the brackets, the No. 2 seed might have an easier path to the championship because of Florida State's suspension," McQuillan said. "Georgia Tech and us are on one side of the bracket and Virginia Tech and a bunch of other teams are on the other side. We've got to win three games in a row in Atlanta anyway, so we're looking forward to it."

Liberty (8-3) opens tournament play Friday at 8 p.m. with a first-ever matchup against South Carolina (6-5), the only team to beat FSU (14-2) on the field before the Seminoles were forced to forfeit Friday's season-ending showdown with Florida, which assumed the No. 1 seed out of the Southeast Region.

"For us, it's a good test, a new opportunity," McQuillan said. "I don't think anyone's picking them to win, but they've got some really good players, a lot of talented kids from the Baltimore area."

A total of 26 players — more than half of USC's 51-man roster — hail from Maryland, including senior goalie Dimitri Pecunes, who won an NCAA Division III national title with Stevenson University in Baltimore County, Md.

"He's definitely the strength of their defense, and they're very capable offensively," McQuillan said. "They have a talented roster and it should be a good game. We're definitely not overlooking them. That would be the biggest mistake we could make."

Should the Flames advance to Saturday' semifinals, they would face the winner between Georgia Tech, ranked second in the MCLA, and Central Florida at 5 p.m. The Yellow Jackets knocked Liberty out of last year's SELC semifinals with a 9-7 loss before defeating the Flames, 15-7, in the second game of this season in Atlanta.

The opposite bracket features showdowns between Florida (7-4) and Georgia (14-1), which lost its first game April 9 at Georgia Tech, 19-8, and two-time defending tournament champion Virginia Tech (6-3) against N.C. State (7-5), with the winners meeting Saturday at 7:30 p.m.

Both semifinal games and Sunday's 3 p.m. championship game will be streamed live on the SELC Tournament website.