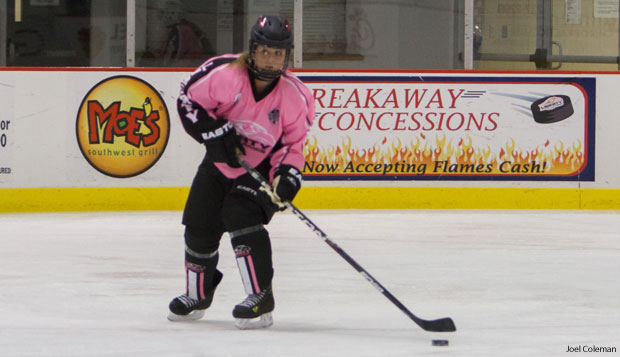 The Lady Flames Division I hockey team came away with a 3-2 victory over the Tri-City Selects from the Carolina Amateur Hockey Association to close out Homecoming Weekend Saturday night in the LaHaye Ice Center.

The Selects jumped out early as Nicole Adden scored on a pass from Sara Herr to put Tri-City up 1-0 midway through the opening period.

Liberty got two goals in quick succession from senior Carly Peleshok and went into the intermission with a 2-1 lead.

Shelby Saltys tied the game at 2 midway through the second, as Liberty goaltender Sam Rupp could not corral the loose puck.

Freshman Carrie Jickling scored the decisive goal for the Lady Flames shortly after, giving Liberty a 3-2 lead they would not lose.

The third period was physical, with the teams whistled for a combined eight penalties in the period. But despite the physical play, the Selects could not manage a tying goal and the Lady Flames held on for the victory.

Liberty outshot Tri-City 48-16 on the game, and Rupp went the distance for the victory, allowing the two goals while making 16 saves. Kelsey Neumann took the loss for the Selects, stopping 45 shots.

The two teams will conclude their two game series on Sunday afternoon, game time is 2:45 p.m.