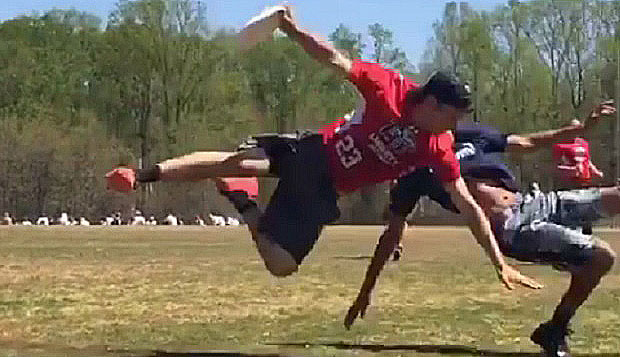 Liberty junior Anthony Tallant comes down with a game-winning catch in Sunday's seventh-place game against ODU.

With 60 percent of its players freshmen and sophomores, there is plenty of potential on this season's Liberty University's men's Ultimate team, which placed seventh at this past weekend's Virginia Conference Championships hosted by George Mason University. The Flames narrowly missed a regional bid, needing a top-five finish in the nine-team field.

The Flames, seeded eighth, faced four teams ranked in the top 60 in the nation, losing to top-seeded Virginia Tech, 13-8, fifth-seeded Virginia, 13-5, fourth-seeded William & Mary, 13-6, and third-seeded Virginia Commonwealth University, 11-7 after rallying from a 7-2 halftime deficit to make it a 9-7 contest. Liberty defeated ninth-seeded Radford, 13-2, for its only win on Saturday, before losing to host GMU, 13-9, and beating Old Dominion University, 9-7 in the seventh-place game.

"It's definitely a very strong conference this year, and everybody's getting stronger," Flames Head Coach Brendan Phillips said. "The guys played really well, but opening up against teams like Virginia, Virginia Tech, and William & Mary, top-ranked teams in the country, they're experience was evident. Virginia Tech's ranked No. 20 in the country this year, and we had three turnovers inside our own 10-yard line. That pretty much sealed it."

Several strong individual performances highlighted the weekend for the Flames, including senior cutter Josh Neubauer, who played with sure hands on offense and was all over the field on defense, assistant captains James Allen, a junior who played primarily offense, and Zach Williams, a senior who focused on defense.

"They did an excellent job of providing leadership on both sides of the field this weekend," Phillips said. "Anthony Tallant, a junior, made multiple highlight reel catches for us, and won the game for us against ODU with a catch. He had several remarkable scores and catches, real game-changers for us."

Though this season has ended, Phillips is enthusiastic about the opportunity to build on the foundation established this year next fall.

"So many guys on the roster impacted the game in meaningful ways," he said. "I'm really happy with the progress made this year. It was disappointing to end the season this early, but we're definitely looking forward to what these guys can accomplish next year and in the years to come.

"We have a very strong base to work with going forward and had multiple teams comment on how strong our talent was and how our young talent is going to be really, really tough in the future."