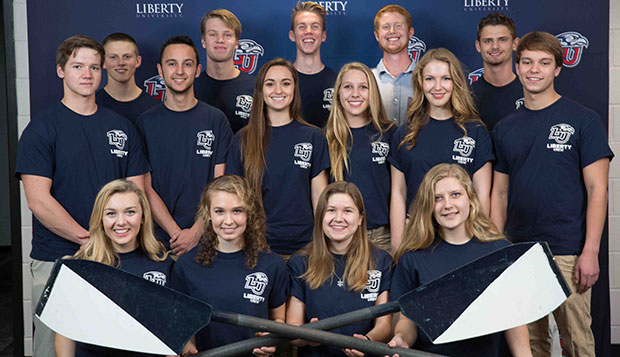 The regatta featured a record 322 entries from 61 clubs, competing in both collegiate and open divisions of an event held annually since the mid-1970s.

"It's becoming more and more popular in the rowing world," Liberty Head Coach Debbie Prowse said. "It was absolutely perfect rowing weather and there were a lot of boats, but the race officials and marshals handled the traffic pattern really well and it seemed to run very smoothly."

Liberty's women's novice four had the best weekend overall, qualifying fifth out of 20 boats in Saturday's time trial in 7 minutes, 25.97 seconds. After clocking a time of 8:34.58 in a semifinal raced in different conditions, the Lady Flames advanced to the A final, where they placed fourth out of six boats in 8:20.93. Liberty trailed only teams from Virginia Tech, JMU, and High Point, and placed ahead of Central Florida, which had beaten it by more than eight seconds in the time trial.

"That was our only boat that had a lineup that remained intact and it rose to the occasion and put on a great race," Prowse said, noting it will definitely be one she will send to the May 28-29 ACRA Nationals, over Memorial Day Weekend in Gainesville, Ga.

The Flames' men's novice four did not qualify for the semifinals, after rowing a time of 7:15.68 in their time trial. They went directly to Saturday's E finals, which they won, beating boats from Alabama, Auburn, Tennessee-Chattanooga, and William & Mary in 8:09.40.

"They rowed an excellent race, and came from behind with a great sprint to row past Alabama and win," Prowse said.

Sophomore Cara Pierce subbed in for freshman Zach Moore as the coxswain on that boat, with freshman Spencer Barrett rowing in the stroke seat, freshman Josh Elliott in the three seat, sophomore Ben Henderson in the two seat, and freshman Brad Weisman in the bow. Moore was in Kissimmee, Fla., competing for the Flames' paintball team at its national championships.

Liberty's women's varsity four — featuring sophomore Caleb Mattingly at coxswain, junior Kathleen Lopp at stroke seat, sophomore Katrina Ramos at the three seat, sophomore Mary Beth Klein at two, and senior Rachel Williams at bow — qualified for the semifinals with a trial time of 7:30.93. That boat placed fifth in the semis, raced in more difficult conditions, in 9:14.03 to advance to the C finals, where it finished fourth in 8:50.27

"One of our varsity rowers, Moriah List, had a medical situation so we had to take a novice rower, Katrina Ramos, and sub her in this week," Prowse said. "She had to jump right into a varsity boat having only trained for six weeks on the water. It was a big challenge, a difficult situation she had to persevere through and she did a great job. We were really pleased."

Also on that boat, regular coxswain, senior Kekoa Ellingson, was unavailable so Mattingly took his place.

"That lineup changed pretty dramatically and persevered," Prowse said. "To get into the C final with all that going on was a success."

Overall, she said the team exceeded expectations, particularly rowing in such a large event.

"They handled themselves really well and are really coming together as a team, with a lot of novice rowers," Prowse said. "They've learned a lot, growing by leaps and bounds, since they started rowing in March. It's pretty amazing."

Crew at Head of the South