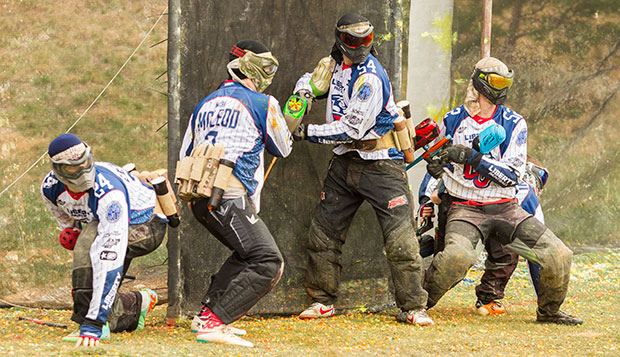 Micah McLeod (second from left) and Christian Campbell (54) played key roles for the Class A team in its third-place finish at nationals.

For the first time in four years, Liberty University's paintball team reached the Final Four of the Class A division of the National Collegiate Paintball Association (NCPA) Championships, waged Friday through Sunday in Kissimmee, Fla. The Flames were eliminated by eventual champion Texas A&M, 7-3, but captured third place based on season record, which was better than that of Florida Atlantic, a 6-5 semifinal loser to Central Florida. Texas A&M defeated UCF by an 8-1 count in the final.

"Texas A&M had a few professional players that play in a different league," Liberty Head Coach Brian Davidson said. "It was definitely the toughest competition we've ever had, but we put up a fight and tried to make it as close as we could. Everyone that watched us thought we were the strongest team and the best team to go up against them and we scored more points in that final match than all of the other teams combined had against them in the entire tournament."

The Flames had faced the Aggies in the preliminaries and lost, 5-1, in another tough battle after opening tournament play with a 10-4 triumph over the Naval Academy despite being called for five penalties, including a 10-minute gross major, in the 20 minutes of action.

"Five penalties was the most we've ever had, but we were able to dig down deep," Davidson said. "It was a true test of how we could come back."

Liberty juniors David Dickerson and Christian Campbell ran through the inflatable bunkers and took out three Midshipmen on a surprise attack that give the Flames a 7-4 advantage with 4:02 left in the second half. Brendan Liakos took out a Navy player on an isolated run to give the Flames a 9-4 advantage before fellow senior Kayne Boyer, coming off a hamstring injury, beat the clock after picking up the flag with a last-second sprint to cap the scoring.

"David Dickerson did exceptionally well up the center," Davidson said. "He was getting a lot of kills there and being very aggressive."

The Flames advanced past the University of Miami, 5-3, to receive a bye heading into Saturday's Ocho Finals against Purdue, a 7-4 victory that sent them to Sunday's semifinals.

"It was 4-4 at halftime after we went back and forth with them point for point," Davidson said. "In the second half, we figured out what was working the best and really played our A game."

Complete results, including final standings, are available online. But more than the scores on the board and the paint on their opponents, the Flames left their mark on the tournament by their actions and words.

"We really used this event as a ministry and to share what we stand for, living a life like Christ and showing them what it's like to be a Christian," Davidson said. "We prayed with every team we faced after every match and multiple teams came up to us and said they were refreshed by that, to see something that's not typical in a paintball match.

"Overall, we were very pleased with how our players played, their overall attitude, and how they carried themselves and acted in front of everyone," he added. "We're not going home with our heads down. Third place is still quite an accomplishment. The tournament really tested our guys and gave them an opportunity to share their faith."