Northwest Region title on line for Flames, Hokies on Friday 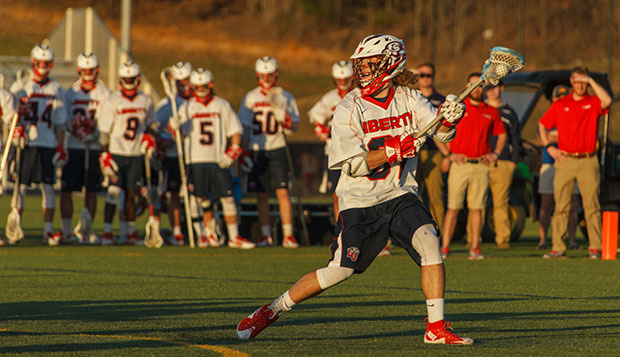 Senior midfielder Bryce Mrakovich has served as the Flames' primary playmaker over the past four seasons.

While they all have played critical roles in the team's transition from MCLA Division II to Division I status in 2014, team captains and catalysts senior attack Ryan Miller and senior midfielder Bryce Mrakovich have consistently sparked the Flames' attack since arriving as freshmen in Fall 2012.

"It's going to be difficult for somebody to come in and break some of these records that guys like Bryce and (senior captain and midfield linemate) Brett (Bernardo) and Ryan have set," Liberty Head Coach Kyle McQuillan said.

Miller became Liberty's career scoring leader last season and should finish his career ranked among the MCLA's top five all-time points leaders. He currently ranks third nationally at the Division I level in points per game (6.3) with 26 goals and 37 assists (63 points), bringing his career totals to 192 goals and 128 assists (320 points).

"Ryan has been not only an outstanding lacrosse player, but academically, he's been an (MCLA) Academic All-American every year that he's played," McQuillan said. "He's one of the smartest kids that we have."

Similar to Bernardo, who is more of a scoring threat, Mrakovich has an innate ability to jumpstart the offense as the Flames' primary playmaker.

"Bryce's statistics don't pop as much as Ryan's, but Bryce is a leader on the field and he kind of lets his actions speak for themselves," McQuillan said. "When we need a big play in a big moment or need somebody to step up, Bryce is always the guy we have leaned on for that."

While senior faceoff specialist Charles Fianko establishes the game's tempo with every restart, no one is more of a game-changer than Mrakovich when the Flames have possession.

"He is always a guy that stands out as a huge difference-maker and a guy that really dictates the flow and the tone of the game," McQuillan said. "If we start getting on a run or finding a rhythm, it's usually based off a play that Bryce is able to spark or create."

Miller and Mrakovich often feed off each other on the field, setting up one another's scores.

"Being able to play with each other for four years, you definitely learn how each other plays and know where we're going to be in certain situations," Mrakovich said. "We don't even really need to look up to know that the other one's going to be there. That's definitely been helpful throughout our careers."

Liberty will need contributions from all of its seniors and underclassmen alike if it is going to stage its second upset of Virginia Tech in three years, Friday at 7 p.m. The Flames clinched the Northwest Region title with a dramatic 10-8 triumph over the Hokies in their first season of Division I play before falling in last spring's rematch, 15-7 in Blacksburg, Va.

Liberty moved up one spot to No. 17 in this week's MCLA Division I Coaches Poll while Virginia Tech dropped two places to No. 16 after losing back-to-back games last weekend to No. 10 Boston College and No. 11 Florida State, two teams that also defeated the Flames this season.

Georgia Tech, which ended Liberty's season in last year's SELC DI tournament semifinals and dealt the Flames their only other defeat this spring, remained at the No. 2 spot and is virtually guaranteed at least an at-large bid into the May 9-14 MCLA National Championships in Orange County, Calif. That may mean the only other team to qualify out of the conference will be the champion of the April 22-24 SELC DI tournament near Atlanta, or the runner-up if Georgia Tech is the winner.

"Losing to Boston College and Georgia Tech (in the season's first two games) definitely hurt us, and Florida State was a tough one, too," Miller said. "We want to win the SELC no matter what, anyways, so I don't think it changes our goals for the end of the season. It just gives us that extra motivation to work harder at the end of the season."

Friday's game against the Hokies will determine the Northwest Region regular-season champion and No. 1 seed in the SELC tournament.

"They've definitely been our rival the past three years, them and Florida State, so that's going to be fun to be able to play them on Senior Night and have that be our last game on this field," Mrakovich said. "I've been playing with Ryan and some of the other seniors for all four years and we definitely want to finish it off with an SELC championship and then take it on to nationals."

The Flames are also looking to defend their home field and stretch to 23 games their winning streak at the Liberty Lacrosse Field that dates back to April 10, 2012.

"That's definitely a big thing, especially for the seniors," Miller said. "To keep that streak going is something to hang our hat on, no matter how the season ends up. To go four years undefeated at home would be pretty cool."