Flames will send 10 tae kwon do fighters to nationals in Colo. 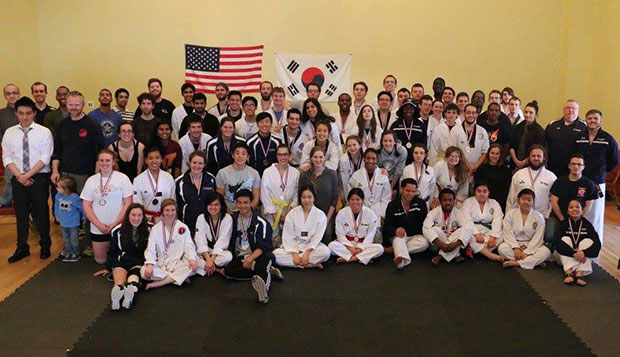 Competitors from all schools represented at the ACAT tournament hosted by Virginia Tech pose for a group photo.

Liberty University's men's and women's tae kwon do teams entered 18 student-athletes in the spring semester's only Atlantic Collegiate Alliance of Taekwondo (ACAT) tournament, hosted by Virginia Tech on April 2. The Flames and Lady Flames returned to Lynchburg with 16 medals for top-three finishes in various belt and weight divisions.

"If we had a most-improved award, he'd probably get it," Liberty Head Coach Tom Childress said. "He has come in and really grown phenomenally. He demands perfection in himself, which is an admirable trait, and he's an all-around team player. He's extremely competitive, but also a leader, working with the beginners."

April Handog, a senior and Isaiah's older sister, was the runner-up in the women's middleweight blue belt division.

While there are no team champions awarded, Childress believes all 10 Liberty competitors have decent shots at medaling at the national event will have a field of more than 600 collegiate student-athletes.