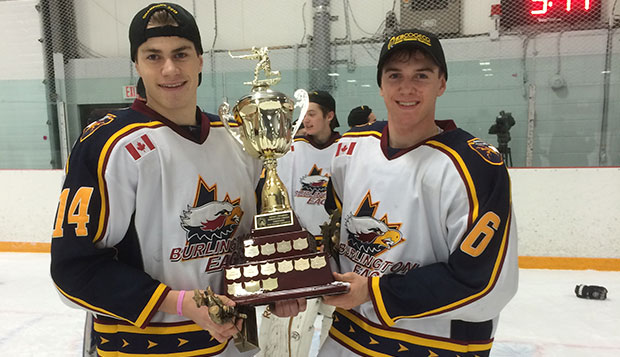 Incoming Liberty University ACHA Division I men's hockey centers Andy and Cody Clarke committed to become the third pair of brothers on the team next season after playing on the same line during scrimmages at the Flames' Hockey Recruitment Camp, held March 31-April 2 at the LaHaye Ice Center in conjunction with Liberty's College For A Weekend (CFAW).

The Clarke brothers will join the junior-freshman forward duo of Chase Harris and his younger brother Owen Harris and freshman defenseman Kyle Crane and incoming forward Jamie Crane, who committed at the same time as the Clarke brothers. They are two of nine newcomers to date that the Flames will add to their roster next fall.

"This is a fantastic group of young men who have high character and high compete level," Liberty Head Coach Kirk Handy said. "We are so excited to have them committed for the fall."

After playing together on the same power play and penalty kill for the first time with the Burlington Eagles' Major Midget team in 2013-14, the Clarke brothers competed against one another this past season.

Andy Clarke, 18, who is 6-feet, 2-inches tall and weighs 185 pounds, scored 14 goals and distributed 13 assists in 42 games as a rookie with the Winchester Hawks Junior "A" team. His older brother Cody, who celebrated his 20th birthday at the recruitment camp and is 5-11, 175, netted 11 goals with 12 assists in 44 games with the Ottawa Canadians.

"We both style our play around being tenacious and hard-working and we always feed off each other," Andy Clarke said. "He has better hands and a softer touch on the puck. I, being bigger, am better at blocking shots and I like to get down in the corners, where I'm able to pin people and use leverage against the boards."

"I hope to bring my speed and work ethic to the game," Cody Clarke added. "I just hope to be one of the hardest workers on the ice, to stay positive and do what I can to help my teammates out."

Both brothers spent last year as part-time students at Carleton University in Ottawa, where Andy studied environmental science and Cody mechanical engineering. They attend the same church in Ottawa, Ontario, as the family of another set of brothers who have donned Flames jerseys — graduates Adam, Brad, and Chad, and youngest brother Devon Docksteader, the standout junior forward on Liberty's DII team.

After meeting his future teammates at the spring recruitment camp, Andy Clarke expects the Flames to mesh well when they report to preseason camp in August.

"Coach Handy brought us in to meet the captains and I love the camaraderie that we already have," he said. "It's a real tight-knit group spiritually. Having three sets of brothers should work in our favor. If we jell really well and work off each other, that's going to be our point of success. The best teams I've ever played on have been really tight-knit and gotten along really well. All I can ask for is our team works as hard as we can. As long as the chemistry's really good, we can go right to the top."

More importantly, Cody Clarke is confident he and his younger brother will thrive academically, socially, and spiritually at Liberty.

"I was really impressed by how kind and friendly everyone was and how social everyone was," he said. "I'm hoping to build some good friendships and learn a lot about the game. It seems like Coach Handy has got things going on the right track and he will do that and guide us to be good men and leaders in life."