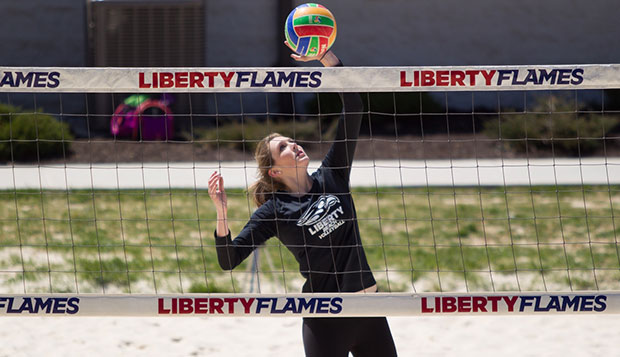 Beach volleyball is traditionally a summer sport, so the windy and wintry weather that greeted the 27 pairs of players who competed in Saturday's Liberty University's season-opening tournament — held on the courts located beside the Liberty Field Hockey and Lacrosse Fields and beyond the East Campus Intramural Fields — made for some unusual playing conditions, complete with snow flurries.

"It was a very windy day, and this was not just our first spring tournament, but also one of the first times our teams have ever played in conditions like that," Liberty Head Coach Rachel Willis said. "Gusts over 30 miles per hour stirred up sand and made it difficult at times to stay in system. It was a great opportunity for our teams to learn how to work with wind, use it to our advantage, and not just to let the wind get the best of us."

The Flames' senior pair of Paul Brueckner and Eli White and sophomore duo of David Muller and Caleb Pitcher tied for third place after losing their semifinal matches to the two pairs of finalists.

"Although we didn't have a current Liberty team in the finals, we are excited to see the men's players continuing to grow in their athleticism and reaching their potential," Willis said.

On the women's side, which featured 21 of the 27 teams, playing on six of Liberty's eight courts, the Lady Flames' tandem of graduate Karyl Wiese and junior Morgan Horne finished runner-up in the nine-team Open division to a pair of players from the Greensboro, N.C.-based Beach South Volleyball club team. Liberty freshman Ashlyn Witt and sophomore Cali Anderson combined to tie for third out of 12 tandems in the AA bracket, behind two duos from Beach South who met in the final.

"Beach South teams always demonstrate such discipline in their offense, but especially in their defense," Willis said. "It makes them a great opponent because it highlights ways that we can improve."

Willis and VanDePerre are teaming up to start a Lynchburg affiliate of the Beach South organization this spring, hosting a Beach Developmental Program open to boys and girls ages 18 and under from 5:30-7 p.m. May 2 to July 27 on Liberty's eight beach volleyball courts.

Liberty's women's and men's teams will next compete at the Southern Sand Collegiate tournament, April 23 in Apex, N.C., where Willis anticipates a considerably smaller field.