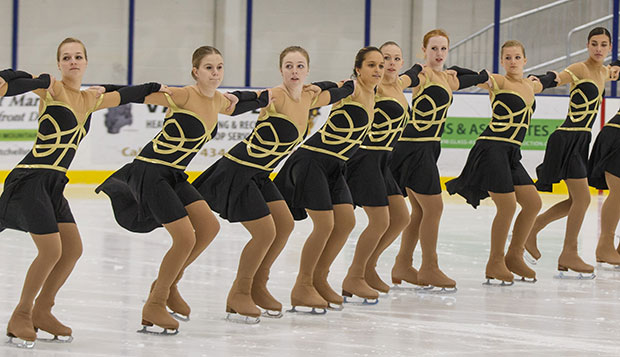 Growth and development have been two staples of Liberty University's synchronized skating team since the program made its debut back in 2008.

"We started with about 10 girls and only one of them had synchro experience," Lady Flames Head Coach Tatiana Payne said.

She said the 2012 addition of Meghan Schenker, an alumna of Miami of Ohio — the No. 1 program in the country for collegiate synchronized skating — has helped elevate the program in recent years.

"Just to have her knowledge and connections on the team has really been valuable," Payne said. "Having her on board and, through the years, with our team being successful, we've really been able to every year increase the number of recruits that we have and quality and numbers. It's very exciting to see the growth in name throughout the skating community and recognizing Liberty University (when it travels)."

The program underwent a bit of a rebuilding year this past season, but Payne said the future looks bright with another excellent group of figure skating and synchronized skating recruits coming in.

"It was a good season overall," she said. "We only had four returners from last year and we had 10 newcomers (but) we saw a lot of spiritual growth and we were able to really grow and bond as a team this year. (The sport) requires a lot of teamwork and a lot of patience with each other. That's why by the end of the year we are a pretty tight-knit family."