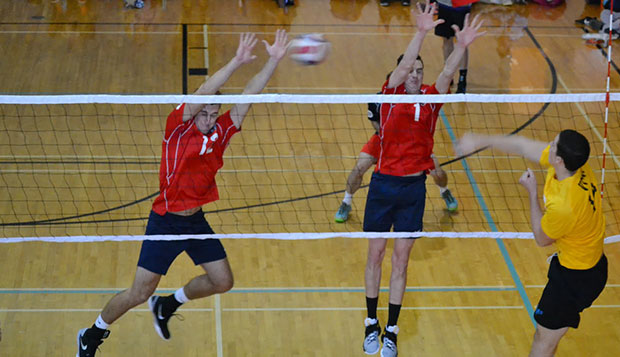 Middle hitters Luke Werth (left) and Josiah Hershberger, who led the Flames offensively, can't get their hands on a spike.

For the first time, Liberty University's men's volleyball team sent both its Division I and II teams to the NCVF National Championships in Louisville, Ky., where they were eliminated in the first round of the Saturday's respective Silver and Gold brackets.

"The guys passed well and were getting kills and a few big blocks, but in the first game, we missed a few serves and were called for touching the net five times on defensive blocks or kills," Liberty Head Coach Bryan Rigg said. "Being overaggressive can (backfire). That swung the momentum away from us."

Sacramento State had a solid core of players back from the team that placed seventh in the Gold bracket of last year's NCVF Nationals and reached the semifinals in 2014 and they communicated well together.

"Sacramento State came in ranked 16th and they've played a tough schedule, including Virginia Tech and UC-San Diego in the tournament," Rigg said. "They're probably a top-15 team. Similar to Arizona (which swept the Flames in Friday's first crossover match), they don't have too many weak spots and they know their roles really well."

The Flames' game plan was to attack the middle, the one area that looked vulnerable, but the Hoosiers adjusted their defensive coverage.

"Blocking and hitting-wise, we got our best performances from our middles, Luke Werth and Josiah Hershberger," Rigg said. "We had very few errors out of our middle hitters, but by the end of the game, they were double- and triple-blocking us, which opened things up for us on the outsides."

"Our passing was really good, especially our service-receive passing, with 75-80 percent free-ball passes where we could run all three options on offense," Rigg said, noting senior libero Josiah Williams led the Flames in passing along with senior defensive specialist David Hong and freshman opposite hitter Josh Talamoa.

In the first match of the day, the Flames' DII squad challenged Indiana's B team in the 8 a.m. opening round of the DIII Gold division playoffs and came up just short in both games, losing 28-26, 26-24.

"Both games went down to the wire," Rigg said. "We came out strong and played more aggressively for the first half or three-quarters of each game, but had a hard time finishing."

Indiana had defeated Wisconsin-Oshkosh, the top seed in DIII, on Friday to advance to the Gold bracket.

"They're a great team and made great passes," Rigg said. "Indiana continued to perform even when the pressure was on. Most of Indiana's players have been together for three years whereas we were still trying to figure out our lineup in late January and early February, which was the difference between winning the first half or three quarters of games to winning the whole match."

Defensively, sophomore libero Sam Wyman stood out as the anchor, keeping the team going with his passing and serving, while freshman setter Kaden Knepper dictated the tempo and kept the team focused, according to Rigg.

Offensively, John Davenport stood out in the middle for most of the tournament while outside hitter TJ Forsythe passed well and had some powerful kills before Indiana shut him down by putting a double block on him on the outside."

Rigg said the strong representation from both Liberty's DI and DII teams bodes well for the Flames, who graduate Hershberger, Williams, and opposite hitter Sam Eisbrenner, but have five recruits coming in.

"We're really excited about the future of our program," Rigg said. "For the most part, we can play the same group of guys and have good chemistry. Josiah Williams has been a very good mentor for Sam Wyman the last two years and he's very comfortable back there. We have good setters — Kaden Knepper was the MVP for the ECVA South and John Lewers had done a great job on the DI team.

"We have some really good athletes coming in and I hope they will all make the DII team so we can establish a program and not just a team that's up one year and down the next," he added. "The DI teams that end up winning usually have a successful DII team before them."