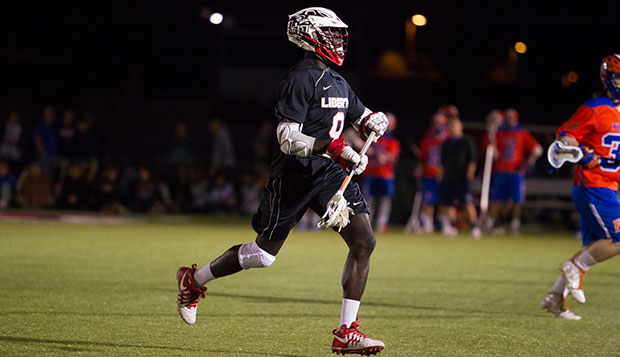 Senior midfielder Charles Fianko takes off with the ball after winning a faceoff in last Friday's midnight win over Florida.

Senior midfielder Charles Fianko won 24 of 27 faceoffs to spark Liberty University's men's lacrosse team's attack and the Flames took the ball and ran with it, clinching a berth in the SouthEastern Lacrosse Conference Tournament with a 20-3 trouncing of Tennessee on its home turf Saturday afternoon.

"Our offense did a great job scoring a lot of points and it was all based off the play of Charles on the faceoff," Liberty Head Coach Kyle McQuillan said. "It was his most dominating performance of the season because of the variety of things he was able to do — winning faceoffs to himself, clearing it out to the wing, pushing it back to both our guys on defense, or pushing it out to the attackmen for fast-break opportunities right off the faceoff."

"In the first I5 minutes of play, they had two offensive possessions that totaled about a minute and a half," McQuillan said. "We were up 10-0 really before Tennessee got the ball to even think about scoring."

Of Liberty's seven victories this season, six have been one-sided battles, including the last three against South Florida, Florida, and Tennessee.

"In the pregame, the guys were focused," McQuillan said. "They knew it would wrap up a playoff berth for us. It turned out a lot like the Florida game, only with a lot fewer people watching and on a different field. It was, by far, the biggest margin of victory" in Liberty's three wins over the Volunteers since moving up to MCLA Division I.

Freshman goalie Matt Nichols made eight saves, including a few spectacular stops early to keep Tennessee scoreless in the first half, allowing the Flames to pad their lead against the Volunteers.

"It was a good all-around effort, one of our better team wins and exactly what we needed to do to move into Friday's (regular-season finale)," McQuillan said.

The Flames, ranked 18th in the MCLA DI poll, remained in a first-place tie with Virginia Tech in the SELC's Northwest Region heading into this Friday's 7 p.m. showdown with the 14th-ranked Hokies at the Liberty Lacrosse Fields.

"That will be for the No. 1 seed in our region going into the playoffs," McQuillan said. "Both teams are 3-0 (in the Northwest Region) and the No. 1 seed will be really important with as many competitive teams as there are in our conference this year."

The Flames will look to stretch their home winning streak to 23 games and build momentum for the SELC Tournament.

"I think the guys are ready for Virginia Tech, which is arguably our biggest rival," McQuillan said. "The last time we played them at Liberty, we got a victory, and we're hoping we can do that again this Friday. It's Senior Night, the last home game of the season. We're going to be focused, for sure, and ready for the opportunity."