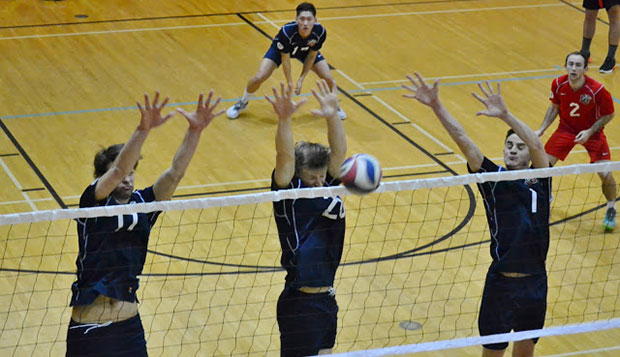 The Flames (3-3) will face Sacramento State (Calif.) — which was knocked out of contention for the Gold bracket by Virginia Tech — in Saturday's opening round, starting at 10:30 a.m.

The Flames' DI squad, ranked 30th in the nation, gave sixth-ranked UCLA an extremely close battle before falling 28-26, 28-26 in Wednesday morning's first round of pool play.

"They're not a big team, and not very aggressive, but they're a good ball-handling team," Liberty Head Coach Bryan Rigg said. "We got to 20 first in both sets, up 23-20 and 23-21 and we probably played our best volleyball today for the whole year. We're a great, athletic team, we just don't have the time together yet to pull out those close games."

Rigg said senior libero Josiah Williams led the Flames in passing and junior Eugenio Dejesus, who joined the team in February, dominated in every aspect of the game.

"No one could handle him," Rigg said. "He was putting balls over blockers. He looks like a guy who's been playing with us for years. Our middle hitters also got blocks and kills. Having them engaged in the game is very important."

Liberty was then swept by No. 19 Ohio State, 25-20, 27-25 — after starting with a 4-0 deficit in the first game due to a four-minute delay in checking in for its refereeing assignment in an earlier match.

"It would have been another point-for-point match if it hadn't been for the penalty," Rigg said.

"We were gunning all the way down to the wire," Rigg said. "Grand Valley State's a totally different team and oftentimes we struggle with those games because we play down to them. If had lost that and finished fourth in our pool, we would have gone down to the consolation bracket."

Instead, Liberty will face 17th-ranked Arizona, which finished second in its pool, in a crossover match Friday at 8 a.m. to determine who it plays at 10:30 or 11:30 a.m.

"If we win the challenge match, we are guaranteed being in the gold or silver bracket (for Saturday's playoffs)," Rigg said. "If we lose, we'll be in the silver or bronze bracket."

The Flames have never played Arizona, one of the 20 original schools in the NCVF.

"They've won a few national championships and have a high pedigree of incoming recruits," Rigg said. "Arizona's in the same tradition of Virginia Tech and Wisconsin-Oshkosh. They're a great, a big team, very tall."

The Wildcats lost their first match in pool play to California-Berkeley, giving the Flames hope of catching them off their game early in the day.

"They came out slow in the morning and went to three sets against Illinois," Rigg said. "If they get into a groove, they will be hard to stop. If we can keep them on their heels, uncomfortable early in the morning, we definitely have a shot of beating them."

Virginia Tech, ranked second in the nation behind Cal Poly, won its pool handily and is one of three ECVA teams to do so along with Penn State and Florida.

"We got off to a slow start against Alabama and could have easily won that pool," Rigg said.

"Kaden leads on the floor, whether he's on or off physically," Rigg said. "He's our motivational leader and always keeps these guys composed."