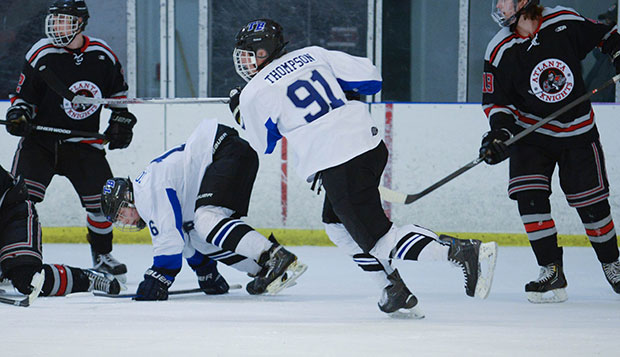 When a torn rotator cuff prevented Brock Thompson from pursuing a collegiate baseball pitching career, the multi-sport athlete returned to his first love, hockey, as his backup plan. The 6-foot-2, 180-pound center from Blaine, Minn., committed to join Liberty University's ACHA Division I men's hockey team this past weekend, during the Flames' Hockey Recruitment Camp that coincided with College For A Weekend (CFAW).

"I love most sports, baseball and football and soccer, but hockey's No. 1," said Thompson, 20. "In Minnesota, you learn to skate before you learn to walk, so I've been skating since I can remember."

The shoulder injury sidelined Thompson for this past season with the Tampa Bay Juniors Elite of the United States Premier Hockey League (USPHL), but he expects to be back to full strength for the start of his first season with the Flames this fall.

"The doctors said by the end of summer, hopefully, I'll be back to 100 percent, so I'm looking forward to that," said Thompson, who scored eight goals and distributed nine assists in the 2014-15 season in Tampa, where he was mostly a role player. "I want to do whatever I can do to help the team."

At the weekend recruitment camp, Thompson participated in three games with current and prospective Flames Division I players.

"It's been a really fun time," he said. "It took a while to get my legs under me, but as the weekend went on, I started playing better. I like the rink and the guys I've been playing with."

Though there are no family ties, as is the case with incoming defenseman Chaydan Lauber, Thompson's uncle, Darin Thompson, helped coach current Liberty Associate Head Coach Jeff Boettger when he played at Bethel College in the mid-1990s.

He is excited to start his collegiate career at Liberty after playing hockey in Minnesota, Milwaukee, and Tampa over the past several seasons.

"I love the campus and I'm really blessed to have the opportunity to play here as well," said Thompson, who plans to pursue a B.S. in Strategic Communication with a specialization in Social Media. "I'd love to play four years here and really pursue my major and strive academically and have the athletic part fall into place."

During his junior hockey career, Thompson has taken classes through Liberty's online program.

"It'll be a big change to be a residential student, but I'm looking forward to it," he said.

Whatever impact he is able to make on the ice, Thompson wants to use his communication skills to become a vocal leader for the Flames.

"I'm really talkative," he said. "I like to be a loud voice on the ice and the bench and I want to be as big of a leader as I can, on and off the ice, and really have that big presence in the locker room."

He is excited to continue to grow in his walk with God, encouraged by teammates with similar spiritual backgrounds.

"I was raised by a Christian family, and I've really grown into my faith," Thompson said. "I am really happy with where I am now."