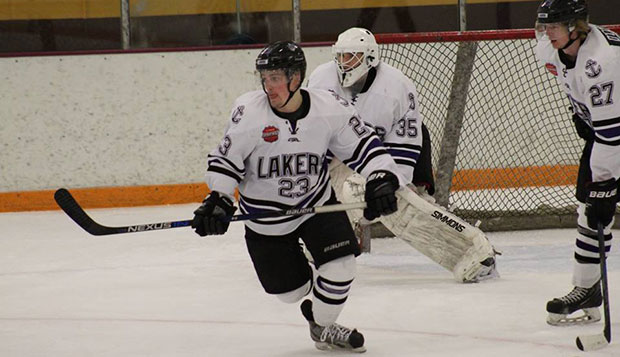 Jamie Crane scored 16 goals and distributed 11 assists in 21 games with the Forest Lake (Minn.) Lakers this past season.

This past season, Liberty University ACHA Division I men's hockey players Chase and Owen Harris joined forces on the same forward line as the Flames' only sibling combination.

Starting this fall, Liberty will feature three pairs of brothers on the DI squad, including incoming recruit Jamie Crane, who will be reunited with sophomore defenseman Kyle Crane.

"Kyle and I played on the same team growing up," said Jamie Crane, a 20-year-old forward who committed to the program at this past weekend's Flames' Hockey Recruitment Camp. "Kyle was talking to me all year saying, this is a great place to go. I already had an idea because I've been here a few times."

"I'm excited to play on this team, on the same team as Kyle again," Crane said. "It should be a good year. We kind of click a little bit. We know where we're at, even though I'm a forward, and he's a defenseman."

Growing up in the Philadelphia area, the Cranes bring a gritty style of game to the ice that Liberty Head Coach Kirk Handy appreciates.

"It's usually kind of hard-nosed hockey, usually blue-collar," Crane said, noting that the Flames' coaching staff was impressed by his versatility on the ice. "They like that I have a lot of speed and am a good passer, and that I've also picked up my physical game and showed that I can play in any role."

Highlighting his four-year junior career, Crane scored 12 goals and distributed 12 assists in 34 games with the Philadelphia Revolution in the United States Premier Hockey League's (USPHL) Empire Division in 2013-14 before netting 16 goals and 11 assists in 21 games with the Forest Lake (Minn.) Lakers of the USPHL Midwest Division this past season.

"I've usually been like an energy guy, a guy that can score when he gets the chance and make plays happen, but who can also put pressure on the defense and cause turnovers, cause havoc, really create opportunities for our team," he said.

He considers himself a team player, which makes him an excellent fit for the Flames.

"It's all about the team," Crane said. "If you put the team first, you realize how far it can take you."

After playing on the same line with current Flames forwards Zechariah Roberts, Chase Harris, and Grant Garvin over the weekend, Crane hopes to make an immediate impact on Liberty's attack starting this fall.

"I'm a competitor, for sure," he said. "I should be training every day over the summer and coming in in top shape."

Besides his brother, Crane formed relationships with other future teammates over the weekend.

"They're all great guys, really welcoming," he said. "It's been great. I love everything about the university, meeting some students, seeing the environment, and visiting every part of campus. Everything's beautiful, brand new, top of the line."

"It was pretty cool to meet him at last year's recruitment camp, knowing he played for the Flyers," Crane said. "I've heard a lot of great things about all of the coaches."

He met former Liberty assistant coach Jake Hannon at a Fellowship of Christian Athletes hockey camp in Buffalo, N.Y., last spring and plans to return to the FCA camp as a player/coach or a counselor this summer, joined by his younger brother.

Crane aspires to continue his hockey career professionally after graduating from Liberty with a B.S. in accounting or business.