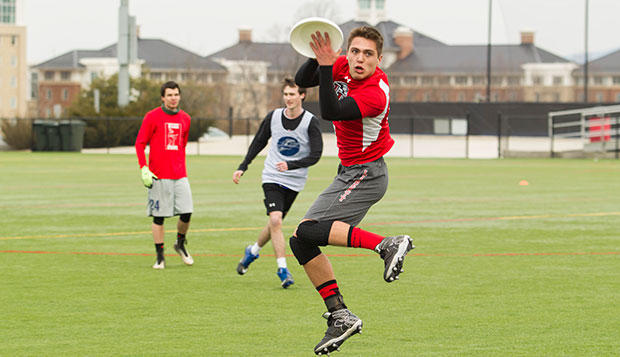 Liberty University's men's Ultimate team won the second half of every match it played. But the Flames couldn't dig out of first-half deficits in four of their five matches, and finished 14th out of 15 teams in Saturday's and Sunday's "Lorton Hears a Huck" tournament in Lorton, Va.

This was the final tournament for the Flames in preparation for the April 16-17 Conference Championships, hosted by George Mason University.

"It was definitely the highest level of competition we've played against," Liberty Head Coach Brendan Phillips said, noting that Virginia won the tournament as the No. 4 seed and George Mason, Georgetown, and Old Dominion were also in the field.

In Saturday's pool play, held in rainy conditions that turned the disc slippery, Liberty lost to second-seeded Georgetown, 11-6, before falling to eighth-seeded Wake Forest, 12-11, and 12th-seeded Towson, 12-8. Then on Sunday, battling 20-25 mph winds, the Flames played No. 9 ODU in the consolation pool and lost 15-5 before rallying past 15th-seeded Drexel in the second half, 12-10.

"We came out slow every game for the weekend and were down at the half by at least three scores in all four of our losses," Phillips said, noting that Liberty trailed Wake Forest, 7-4, at the half before losing on a double game point. "We constantly put ourselves in too big a deficit to make effective runs."

Junior cutter Anthony Tallant, playing in his first tournament of the semester after recent service in the military, and sophomore cutter Micah George helped keep the Flames competitive.

He said the Flames must elevate their game if they are to have a good shot of placing in the top five out of the nine teams in the Virginia Division I Conference Championships and earn an Atlantic Coast Regional berth.