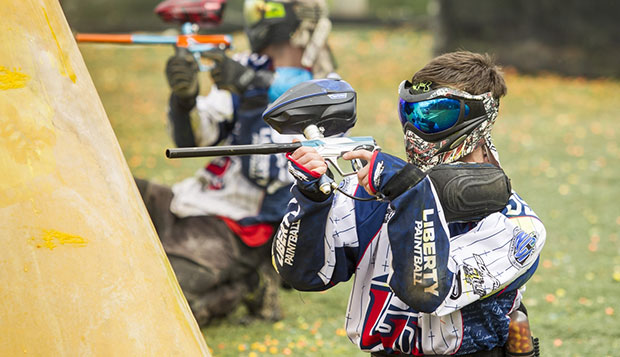 Flames senior Daniel Chiaverini fires from behind a bunker during a match Saturday at the Liberty Paintball Fields.

The Flames moved into first place in the final regular-season Mid-South Class A conference standings by winning two out of three matches on both days. On Saturday, Liberty defeated second-place East Carolina University, 6-5, before losing to NC State, 5-4, and edging Kennesaw State, 4-3, before doubling up the Owls, 4-2, in Sunday's first match and bouncing back from a 5-2 loss to ECU to nip NC State, 4-3.

"The whole thing was really close," Head Coach Brian Davidson said, noting the Flames went 4-2 over the two days to finish ahead of Kennesaw State (3-3), the Pirates (2-3-1), and the Wolfpack (2-3-1). "We beat teams that other teams lost to and nearly every match was decided by one point. We were the best team out there, but it took us a while to get rolling. We haven't had a tournament in a few months, but by the time we finished our last match, it all clicked. The communication was really good and if they keep up that same aggression and intensity, I think they'll be unbeatable at nationals."

Davidson said center attackers David Dickerson and Brian Natzke had outstanding performances along with junior captain Christian Campbell, a versatile player who produced some clutch hits that helped the Flames survive and advance.

"We started off (playing conservatively and staying back) and that really wasn't working," Natzke said. "It's not really our game. We were kind of like playing on our heels at first and then we kind of got in gear and started playing our paintball, playing aggressive, and that's when we started winning points."

Liberty will bring 16 players to Florida to form one Class A team and two Class AA squads, with five players who have the stealth and stamina competing at both levels.

"This weekend was definitely a good test to see how much depth we really have," Davidson said. "With this being a rebuilding year, and guys filling the shoes of seniors who left last year, we want to make sure the guys get enough experience. The first day, I mostly just played starters, but on (Sunday), the starters were getting tired and I put in the second guys and they played really well. I was impressed."

The Flames, ranked 21st in the nation in Class AA, may be at a disadvantage against schools from the South who can compete year-round, such as favorites Texas A&M, Cal State-Long Beach, and Florida Atlantic. But senior Kayne Boyer believes Liberty's team unity will separate it from its competitors.

"The camaraderie on the team this year is a lot better than in it has been in the past and that will push us to that next level, and possibly help us bring home a national championship," he said. 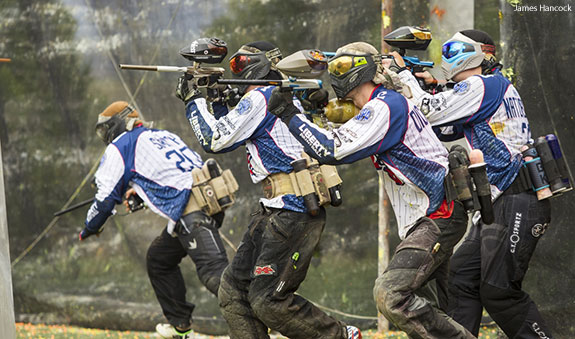