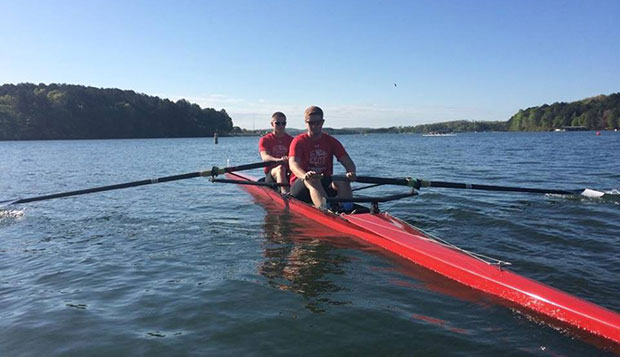 Freshmen Zach Moore and Spencer Barrett rowed to a third-place finish in their men's pair race, Saturday at Lake Hartwell.

Five of the seven boats Liberty University's crew team entered in Saturday's Clemson Sprints regatta were called back to the docks due to high winds that produced white caps on Lake Hartwell in Clemson, S.C.

The Lady Flames' women's varsity four and Flames' men's pair both earned bronze medals for third-place showings. The women's varsity four — led by junior stroke Kathleen Lopp, freshman three seat Moriah List, senior two seat Rachel Williams, and sophomore bow Mary Beth Klein, with senior Kekoa Ellingson serving as the coxswain — crossed the finish line in an even 9 minutes, 0.6 seconds, behind only Clemson's "A" boat (8:29.3) and Charleston's "B" boat (8:56.4). The men's pair, meanwhile, featuring freshmen Zach Moore at stroke and Spencer Barrett at bow, finished in 8:46.5, behind the "A" tandems from Duke (8:09.3) and Emory (8:11.2).

"They did really well," Liberty Head Coach Debbie Prowse said. "For the men's pair, this was their first race after only getting to practice a couple times, and they beat teams from Clemson and Auburn."

Liberty's men's novice eight was on the starting line when the marshal canceled the race.

"The race conditions were really nice in the morning, but as the day progressed, it got windier and windier," Prowse said. "When our men's novice eight boat left the dock, it was still pretty decent, but by the time they got to the starting line, the gusts of wind picked up and it got really bad. They had to row back to the dock and when they pulled them out, gallons of water poured out of their boats."

She said, for those who got to row, the competition was invaluable as the teams gear up for the SIRA Championships, April 14-17 at Oak Ridge, Tenn., and the ACRA Club National Championships, May 28-29 at Lake Lanier in Gainesville, Ga.

"We have so many novice rowers on our team, they just need the race experience, to understand the start of the race and what to expect," Prowse said. "It was really exciting for them, just get off the water loving it. They have come so far in just a month since they got on the water in the second week of March."

Liberty's men's novice eight had to turn around after reaching the starting line due to high winds.