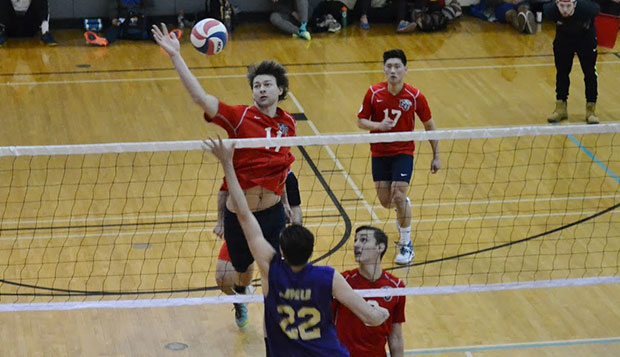 Liberty senior opposite hitter Sam Eisbrenner spikes over a block put up by JMU in a recent match.

"Against West Virginia and Army, we won the first set decisively but then the second and third sets were big letdowns," Liberty Head Coach Bryan Rigg said. "The team dynamic is very interesting. There are high highs and low lows for this team, with a great deal of inconsistency. We've had so much change and turnover this semester (since a Jan. 29 "Midnight Mayhem" loss to Virginia Tech.) We can put together short runs, but don't have the familiarity with one another to be able to sustain them. They're gifted athletes, but haven't had the time together to really jell as a team."

Senior libero Josiah Williams was selected to the All-NCVF Division I first team for the third year in a row. "He's had a huge impact on the team for the last four years," Rigg said.

Liberty junior outside hitter Eugenio Dejesus, a 6-foot, 5-inch tall outside hitter who joined the team in late January, helped keep the Flames competitive as the underdog in most of their matches.

"Gene really upped his game this week," Rigg said. "He's only been playing volleyball for two years and been doing this for two months, but he dictated the tempo of the match when he was at the net. He passed very well, had some service aces and a bunch of big blocks and spikes. He's a gifted athlete who has picked up the game and become dominant quicker than anybody I've ever seen. Gene's amazing to watch. He has a 38-inch vertical jump and is awesome hitting the ball above whatever block is put up."

Dejesus killed several assists from sophomore setter Alex Lower, who also set up opposite hitter Sam Eisbrenner, who had a number of critical kills, and middle hitter Josiah Hershberger, who led the Flames in blocks.

Rigg said the Flames are still searching for vocal leadership on this year's squad.

"We really need somebody on the court saying ‘You can do this,' to lift the team with their words and exude confidence," he said. "(Assistant Coach) Ryan (Culkin) and Kevin (Snyder, last year's leader in kills) used to do that when they were on the court. Our seniors are all fairly quiet guys. They have a lot of humility, but same time, we need vocal leadership, so it has to come from elsewhere."

The Flames finished ranked 30th to qualify for their third consecutive appearance in the 48-team NCVF Division I National Championships — this Thursday through Saturday in Louisville, Ky. They will play No. 6 UCLA, No. 19 Ohio State, and No. 43 Grand Valley State in Thursday's pool play before competing in challenge rounds on Friday. Then, teams will be a reseeded into 16-team gold, silver and bronze brackets for Saturday's playoffs.

"Everybody gets a shot," Rigg said. "If we had gotten out of our pool (at Saturday's East Coast Championships) we probably would have been seeded between 24 and 30. Instead, we will probably be the number three seed in our pool."

Also at Penn State, Liberty's Division II team went 3-0 in its pool, defeating SUNY Oswego, UMBC, and William & Mary, before receiving a bye through the first round of the playoffs and being eliminated by Virginia Tech — a team the Flames had defeated decisively at last weekend's ECVA South Division II tournament in Blacksburg — 25-19, 25-20.

"We had better size and were more consistent as a team last weekend," Rigg said. "They came out ready to play in the rematch. It was single elimination, so that was it."

The DII squad is ranked No. 11 in the country in the NCVF DII poll and will be placed in the same pool as No. 14 Ohio State's and No. 34 Alabama's B teams as well as No. 37 Rhode Island Community College.